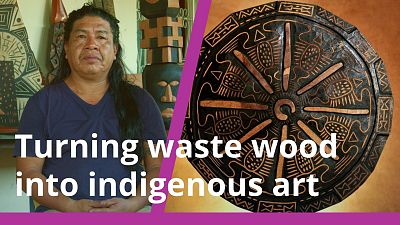 “Many [indigenous people] have been erased, but those who are here today are in a struggle, in ‘a war’, so that people can access knowledge about the culture of indigenous peoples,” says Isaias Miliano, an indigenous visual artist in Boa Vista, Brazil.

Isaias, who describes himself as an “Indian of the Patamona ethnic group”, says art is a tool in the fight to educate the world about indigenous communities, “to respect the food, the music, the forest, the way of living and the way of transforming and valuing the forest, water and the future of the planet.”

From waste wood to art

To create his art, Isaias searches the city and surrounding areas for raw materials to reclaim and recycle, often using abandoned logs, doors, windows and furniture.

“I can take what would have become firewood from a pizzeria or a bakery and transform it into a decorative object, into an artistic object,” says Isaias, who believes that this transformation process is the most beautiful aspect of his work. “You send a message that you can transform garbage into luxury.”

After collecting and cleaning the materials, Isaias works on them using chisels and paint to add indigenous symbolism.

The symbols in his art are often linked to the natural world: mountains, stars, plants and animals or indigenous rituals, myths and dances. He also incorporates cave paintings and engravings from local archaeological sites.

Watch the video above to see Isaias's work.