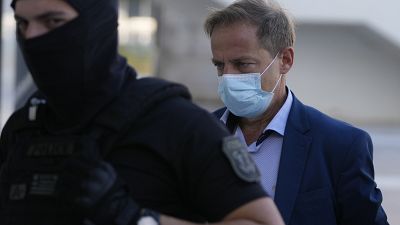 Dimitris Lignadis was accompanied by police as he arrived at the court in Athens on Wednesday.   -   Copyright  AP Photo/Thanassis Stavrakis
By AP  with Euronews  •  Updated: 14/07/2022

Lignadis, who was the artistic director of Greece's National Theatre until he resigned in 2021, was found guilty yesterday of raping two men when they were children.

The mixed-jury gave the verdict in an Athens court in two of four cases.

A third case against the 57-year-old was dropped for insufficient evidence, while the fourth accuser never appeared in court to testify and had provided a false address.

Lignadis, who has spent 17-months in custody already, successfully appealed for his sentence to be suspended. He will have to pay €30,000 bail and register three times a month at his police station as part of his conditions.

The announcement that the sentence would be suspended was greeted with dismay by victims and members of the public who were in attendance.

Lignadis, who has denied the charges, resigned his position as artistic director when the accusations surfaced in February 2021, having held the position since 2019.

What did Dimitris Lignadis do?

Lignadis’s trial has been ongoing for five months after the allegations were made pubic more than a year ago.

In one case in 2015 Lignadis was found guilty of raping a child at a hotel. The other case, also in 2015 took place at Lignadis’s home.

The two cases which Lignadis was not found guilty of took place in 2011 and 2018.

Lignadis was supported by friends in court, with Greek MPs also in attendance.

Both of the guilty verdicts were majority rather than unanimous. This led Ligandis’s lawyer to proclaim that he is still innocent.