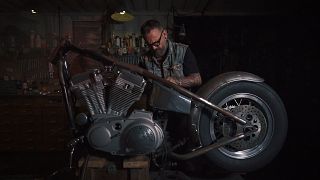 Marco Möller is the founder of Möto Rauch & Staub, a popular hangout for Dubai’s bikers, craftsmen, and artists.

An electromechanical engineer by trade, Marco grew up in Germany, working with his hands.

“My old man used to refurbish everything at home. We did not have much money so we would repair stuff,” he says.

18 years ago, a friend of Marco invited him to Dubai to build a kitchen, which later led to a job as a technical director for a German firm building kitchens in the city.

“I enjoyed my job. I got to travel and see many countries, but I did not work with my hands anymore.”

Everything changed after Marco broke his back in an accident. Having become physically and mentally down, he got his hands on an old motorcycle that he decided to restore.

Marco says: "It's satisfaction. You have something that is not working anymore, you fix it and give it a life again.”

Marco says the process in turn brought him back to life. “I decided that I want to do this (working with bikes) everyday.”

Marco quit his job to join a friend who had a warehouse - there they started fixing and building motorbikes. After initially struggling, and on the advice of friends and clients, they built a kitchen and expanded the place.

“We built the place by our own hands; it took me about 3 years to build the place as it is now.”

Möto Rauch & Staub is now Dubai’s only venue combining a workshop, a restaurant, and a barbershop. In addition, it hosts regular music gigs, through the Bull Funk Jamz, and showcases art, something that feeds into Marco’s plan to make it a venue which gives back to the community that once helped him.

“The motorcycle has brought me to people and now those people come to my shop, and I love being here.”