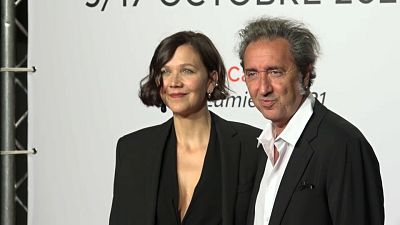 The 13th Lumière film festival started in Lyon on Saturday.

Many famous faces were at the opening including Rossy de Palma, Irène Jacob, Costa-Gavras, Alain Chabat, Valeria Golino and Paolo Sorentino. The guests will present their favourite films and their own latest releases.

Actor turned director, Maggie Gyllenhaal introduced her first feature film, 'The Lost Daughter', based on the novel by Elena Ferrante.

For her, the past and present of cinema are inseparable.

"I kind of gave myself a film education with so many old films I hadn't seen before, and was really inspired by them," she said.

"It's funny, I thought I will do it before I start shooting, mostly really I was watching many many films while I was editing and so inspired by them, so grateful for what came before me."

Film director Joachim Trier said: "This my first time at the festival here in Lyon, it's a great honour, I am a film buff."

"I grew up with Buster Keaton we are going to watch him in one hour you know, I love silent cinema but I love also the fact that we are invited as present modern filmmakers to be part of this, and I am so grateful that Thierry (ed. Thierry Frémaux, Lumière Festival director) invited me."

"It's a festival that talks about the past, the present and the future and that's what we all want to have, right?

"It's my third time at the Festival Lumière and I'm always very happy to be here because it's a festival of love for cinema."

French actor Edouard Baer and Belgium's Benoît Poelvoorde joked that it was good to be among crowds again.

"It's great to be so many people in a room, with emotion, it's crazy!" said Edouard Baer.

"Of course, we have to gather in large numbers not to stay at home all our lives, don't we?"

The opening night was held in front of more than 5,000 people, with a special tribute to Bertrand Tavernier, director and president of the Institut Lumière, which organises the festival. Tavenier passed away a few months ago.

There was a hugely festive atmosphere, after last year's reduced version due to the Covid pandemic.

And there was a huge celebration when it was declared open.

Euronews reporter, Frédéric PONSARD, explained: "The Lumière Festival has opened for a great week of cinema in all its forms, styles, genres and periods.

"Hundreds of screenings, meetings and guests to celebrate the love of the 7th art in the city of the Lumière brothers."

And to kick off the festival with a bang, the organisers chose Buster Keaton's 1928 classic "The Cameraman", a timeless classic that will delight young and old alike.

Street cinema is taking off in Milan