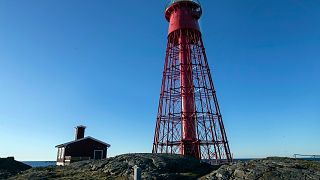 A Swedish nurse has won a competition to watch the Gothenburg Film Festival's entire programme in isolation in a lighthouse for a week.

Emergency nurse Lisa Enroth beat 12,000 applicants from around 45 countries. The film enthusiast is now spending a week in a lighthouse on Hamneskar — a tiny island in the North Sea on Sweden's west coast — to watch the festival's entire selection of more than 60 films.

"Through my work in healthcare I seem to have spent ages listening, testing and consoling. I feel drained of energy," Enroth said in a statement.

"The wind, the sea, the possibility of being part of a totally different kind of reality for a week — all this is really attractive," she added.

The selection process involved a letter as well as interviews and tests to ensure the selected person could withstand the isolation.

"Choosing one single person out of 12,000 was not an easy task, but Lisa made a strong impression on us in her letter," Gothenburg Film Festival CEO Mirja Wester said.

"The interviews and tests she subsequently undertook strengthened our impression of her as the right candidate. And in these troubled times it feels particularly right to be able to give this unique experience to one of the many heroes of the healthcare system who are all working so hard against COVID-19," she went on.

Enroth was taken to the island on Saturday and will remain there until the end of the Festival on February 6. People from around the world can follow Lisa's experience through a daily video diary.

Due to COVID-19 restrictions on public gatherings, most of the festival has been moved online with a real-time streaming platform allowing people in Sweden to watch the movies from their home.

At the Draken cinema, the traditional home of the film festival, only one ticket, awarded through a lottery system, is available for each screening, but filmmakers, actors or producers may also appear to speak about their work.

The opening gala saw the Swedish premiere of Tove, the 2020 biographical film of the Finnish author and illustrator Tove Jansson, creator of the Moomins series. Walking down an empty red carpet, the movie’s director and lead actress dressed the part and the organisers sought to replicate the excitement of a premiere to the lone viewer in the hall. But a buzz was also found online, with people posting photos dressed up for the premiere and drinking champagne.

"We want to encourage that and make it as much as a social experience as is possible,” the festival's artistic director, Jonas Holmberg, said.