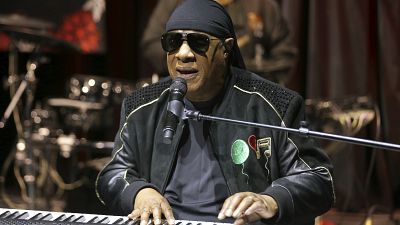 Stevie Wonder performs live in 2018 in Los Angeles. He announced Saturday in London that he will receive a kidney transplant.   -   Copyright  Willy Sanjuan AP
By Dennis Romero and Kurt Chirbas  with NBC News Entertainment  •  Updated: 07/07/2019

Pop star Stevie Wonder announced Saturday that he plans to take a break from performing to prepare for kidney replacement surgery.

"I'm all good," Wonder told the audience during a set at the British Summer Time Hyde Park concert series in London. "I have a donor, it's all good. I want you to know: I came here to give you my love and to thank you for your love."

Wonder, 69, said he would perform three more dates before pausing his schedule for the procedure in September. According to Tickemaster, he's scheduled to perform in Dublin July 9.

The singer, pianist and 25-time Grammy Award winner said he made the announcement to quell rumors about his health.

"I don't want to have any rumors about it, so I'm telling you about it because I like to keep it real with you all the time," Wonder told the crowd.

"I love you," he said, and the audience roared. "God bless you. And until we get together again, I send you love from up above."

Everything to know about the crisis on the Russia-Ukraine border