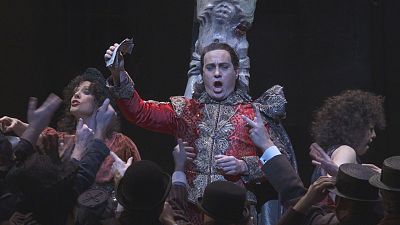 It is the most epic and successful musical version of Goethe's masterpiece ‘Faust’. Written by French composer Gounod, it is currently being staged in London. With glittering lyrics and melodic tunes, poised to challenge even the most well-seasoned singer.

"When I was a child and I started to look at the musical written parts, I said this is impossible to sing. Nobody can sing this and I still believe that, but with the difference that nowadays with a little bit more knowledge. I arrived at this stage of my life singing these parts and having fun."

In the Royal Opera House's production, different settings reinforce the performance's musical richness. With a recreation of the Moulin Rouge, war scenes, and dresses inspired by French painter Édouard Manet, there’s no shortage of visual and melodic colour.

In the plot, an old Faust wants to seduce a young and innocent Marguerite. To do this he sells his soul to the devil/Mephistopheles to become young again. Although written in the 19th century, the story is still universal and relevant. At least, according to tenor Michael Fabiano who plays Faust.

‘As a musician, I go from job to job every day. And that can lead to me not enjoying the moment. Faust is the same kind of character. He's a man that lived life but didn't enjoy the moment. And so the reason why he asks for youth is that he wants to step back and understand what it's like to enjoy the moment. So I empathize with that part of the character.’