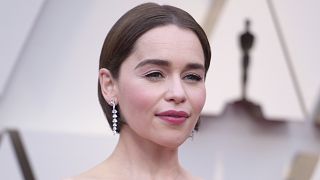 Emilia Clarke arrives at the Oscars on Sunday, Feb. 24, 2019, at the Dolby Theatre in Los Angeles. (Photo by Richard Shotwell/Invision/AP)   -   Copyright  Richard Shotwell AP
By Drew Weisholtz  with TODAY Health and Wellness  •  Updated: 22/03/2019

"Game of Thrones" star Emilia Clarke, best known for her work as Daenerys Targaryen on HBO's Emmy-winning series, has penned a lengthy essay for The New Yorker in which she details how she survived not one, but two brain aneurysms.

After she wrapped filming the first season of "Game of Thrones," Clarke, then 24, was working out in February 2011 when something went wrong.

"My trainer had me get into the plank position and I immediately felt as though an elastic band were squeezing my brain," she wrote. "Somehow, almost crawling, I made it to the locker room. I reached the toilet, sank to my knees and proceeded to be violently, voluminously ill. Meanwhile, the pain — shooting, stabbing, constricting pain — was getting worse. At some level, I knew what was happening — my brain was damaged."

She was taken to the hospital where she was diagnosed with a subarachnoid hemorrhage, "a life-threatening type of stroke, caused by bleeding into the space surrounding the brain. I'd had an aneurysm, an arterial rupture."

She had to undergo emergency three-hour surgery while her life hung in the balance.

"As I later learned, about a third of SAH patients die immediately or soon thereafter," Clarke, who's now 32, wrote. "For the patients who do survive, urgent treatment is required to seal off the aneurysm, as there is a very high risk of a second, often fatal bleed."

She woke to excruciating pain and trouble with her vision, but more complications were on the horizon for the Emmy-nominated actress, who soon couldn't remember her name and could only mumble. She had a condition called aphasia, which affects the way people communicate through speaking and writing.

"I knew I was faltering. In my worst moments, I wanted to pull the plug," she wrote. "I asked the medical staff to let me die."

She returned to intensive care and the aphasia subsided. She soon could remember and speak her full name — Emilia Isobel Euphemia Rose Clarke. A month after she first went to the hospital she was released.

"I went back to my life, but, while I was in the hospital, I was told that I had a smaller aneurysm on the other side of my brain, and it could 'pop' at any time," she wrote. "The doctors said, though, that it was small and it was possible it would remain dormant and harmless indefinitely. We would just keep a careful watch."

In 2013, Clarke was appearing in a Broadway play and had five days remaining on her Screen Actors Guild insurance coverage when she underwent a brain scan which found the growth in her brain had doubled in size. Her doctor said it'd be an easy procedure, but things didn't go according to plan.

"When they woke me, I was screaming in pain," Clarke wrote. "The procedure had failed. I had a massive bleed and the doctors made it plain that my chances of surviving were precarious if they didn't operate again. This time they needed to access my brain in the old-fashioned way — through my skull. And the operation had to happen immediately."

Coming back from this aneurysm proved to be an even bigger challenge than the original one.

"The recovery was even more painful than it had been after the first surgery," she wrote. "I looked as though I had been through a war more gruesome than any that Daenerys experienced. I emerged from the operation with a drain coming out of my head. Bits of my skull had been replaced by titanium."

Clarke would remain in the hospital for a month. In addition to her brain problems, she was fighting anxiety and panic attacks as despair set in.

"I felt like a shell of myself," she wrote. "So much so that I now have a hard time remembering those dark days in much detail. My mind has blocked them out. But I do remember being convinced that I wasn't going to live."

Today, Clarke says she is doing great. "In the years since my second surgery, I have healed beyond my most unreasonable hopes. I am now at a hundred per cent."

Clarke's story, while extraordinary, is not necessarily unique.

"One in 50 people are living with an undetected brain aneurysm, one rupturing every 18 minutes," the Brain Aneurysm Foundation said in a statement. "Of the 30,000 people each year that suffer a rupture, 40 per cent will die, and of those who survive, 66 per cent will endure permanent neurological deficits that limit their ability to resume a normal life."