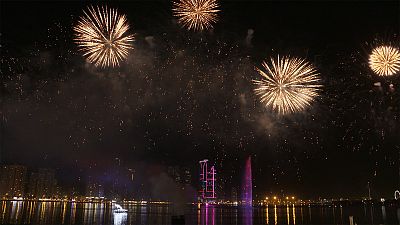 From the dreamlike and serene to the relentless and high octane, the 9th edition of the Sharjah Light Festival is a mix of spellbinding spectacles. Featuring worldclass pyrotechnics and lazers that light up the night sky, the event includes 20 shows, dotted across 17 locations for 11 nights. In all, the festival is expected to attract around million visitors.

A 200-metre-long water parade by French group Ilotopie is one of the many shows on offer. This show is a fairy tale on the water, a delicate prologue tickling eyes and curiosity and drawing the audience to the beautiful lagoon. An aquatic muse dressed in blue gown opens the dance, a dozen glowing silhouettes emerge from a mysterious mist and follow her as a colony of servants. After come the fairy's luggage, carried by giant floating horses and their rides, loaded with trunks and shimmering fabrics. What follows is a captivating show with mythic aquatic heroes, fire and petals swirling in the sky spreading sparkles.

"At one time, we decided that water would be our stage. It’s an empty space that we try to invest with mythology. There was a request to do a first part… which ended like an apperetif with living pictures before we look to the sky,” Artistic Director Bruno Schnebelin said.

"A world emerges from the bay"

This ballet on water was intertwined with a pyrotechnics show called Journey Through Light by Group F. The troupe have enlightened the skies of Olympic Games, Football World Cups, New Year’s Eves at iconic monuments like the Eiffel Tower, the Burj Khalifa and more. Their fireworks combine technicality and art at the same time. When Groupe F takes possession of a building or an event, the sky becomes their paper and fire is their pen.

“We chose to work with the image of the dragon and this dragon circles around Sharjah’s magnificent lagoon. So we find ourselves able to paint the pyrotechnic choreography, linking it with music, but rather it’s linked to the colours of different cultures. Here we feel a kind of world that comes and emerges from the Bay of Sharjah,” said Christophe Berthonneau, Artistic Director, Group F

Khalid Jasim Al Midfa is the Chairman of the Sharjah Commerce and Tourism Development Authority. Euronews spoke to him to find out what the festival means for Sharjah.

“Passion is one of the main pillars of this festival. We showcase Sharjah and the beauty of Sharjah and our identity, the real authentic essence of Arabia and the UAE - The United Arab Emirates and Sharjah. Europe has a different, very rich culture as well. But it’s very different and you know, to bring them together and to have that common language is not easy in the beginning, so it took us some time but look at what we have, look at the result.”

'A Lagoon's Reflection' at the Masjid Al Noor Mosque is another of the many beautiful spectacles on offer this year. The show is a direct tribute to Sharjah as an Arabic capital of culture and a reminder of the landscape around the Al Noor Mosque as well as of the locality's water environment.

“It was really important for me to pay homage to what I have discovered in coming here, it’s the art of patterns, the art of caligraphie, Islamic art in general. And Sharjah is a cultural capital. And it was very important for me to honour this by trying to show as many textures as possible on these mosques. They are magnificent,” said the show's artist, Raphaelle Martinez.

Elsewhere, the Sharjah's famous Palm Oasis sees its trees covered with billions of fireflies. Creating an environment where light pops out and bewilders your senses, the installation seeks to rethink a space often used by families and friends.

"We just wanted to light up the tree that signifies the UAE. We’ve highlighted around 9000 branches so that’s 9000 LED lights and we’ve eh… yeah, it took a good month to do it but we pulled it off," said Joshua Monteath from Nomada Creative Events.

Nomada's creative crew is composed of light artists, lighting designers and engineers who have been active in the field of light art since the 1990s.

The Sharjah Light Festival 2019, A Journey of Lights runs from February 6 until 16.