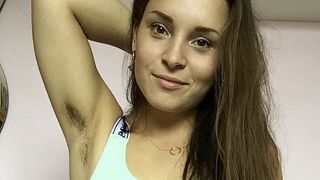 Men have "Movember," where they allow facial hair to grow to raise money and awareness for men's health issues, and now ladies have "Januhairy," a reason to skip shaving and grow their body hair with pride.

Laura Jackson, a drama student at the University of Exeter in the U.K., started the movement after growing her own body hair for a performance and noticing her own reaction to it. "After a few weeks of getting used to it, I started to like my natural hair," she posted to an Instagram account created for the campaign. "Though I felt liberated and more confident in myself, some people around me didn't understand why I didn't shave/didn't agree with it."

Januhairy encourages women to let the hair on their bodies grow in support of a charity, Body Gossip, which empowers people to be the best version of themselves through arts and education. On her crowdfunding site, Jackson has a goal of 1,000 pounds (or more than $1,200) through sponsorships supporting women who grow their body hair.

"Society seems to be behaving as if the natural hair we grow on our bodies is unattractive and distasteful. We are so used to removing our body hair that we are becoming unfamiliar with our authentic selves," she wrote.

It seems as though Julia Roberts was way ahead of the curve on this one. The movie star caused a commotion when she arrived at the premiere of "Notting Hill" with underarm hair in 1999. She recently dished on "Busy Tonight," however, that it was really an accident, as she'd misjudged the length of her sleeves and how much they would show of her armpits.

Gigi Hadid appeared to sport some underarm "fuzz" more recently in a Love Magazine advent calendar video, though it's possible it was just fabric from a jacket she'd been wearing. And women's shaving company Billie made history by running ads featuring women with body hair.

We may just have a trend on our hands!

On social media, the campaign stirred a bit of debate.

"This isn't an angry campaign for people who don't see how normal body hair is," Jackson clarified on Instagram, "but more an empowering project for everyone to understand more about their views on themselves and others."

Interested in joining the movement? Fill out this form to get started!