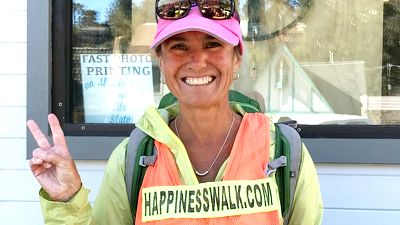 Paula Francis is on a cross-country Happiness Walk: "I feel blessed because I get to experience things that fear would keep me from," she said.   -   Copyright  Courtesy of Paula Francis
By A. Pawlowski  with TODAY Health and Wellness  •  Updated: 26/12/2018

Paula Francis has walked more than 7,000 miles from coast to coast, worn out 14 pairs of shoes and approached thousands of strangers across the country to ask one question: What matters most in life?

"It stops people in their tracks, often people will cry. Because being asked and listening to what people have to say — it's not something we do really well in the U.S.," Francis, 60, told TODAY.

"I try to have a conversation with almost everybody I meet along the way. Some people, I choose; some people choose me."

Wearing a bright orange vest with a sign on the back that reads "Serious about happiness," Francis is on a mission — a "calling" that brings meaning into her life, she said — to find out what drives Americans' contentment and well-being. Hint: it's not money.

Her project, dubbed the Happiness Walk, is part of Gross National Happiness USA, a non-profit that seeks to import some of the philosophies of Bhutan, a tiny kingdom in the Himalayas famed for its efforts to make happiness a national priority. "Gross national happiness is more important than gross domestic product," Bhutan's king declared in 1972.

Where other countries focus on monetary factors, Bhutan tracks progress and success by looking at measures such as its citizens' psychological well-being, health and living standards.

Impressed by the concept, Francis co-founded Gross National Happiness USA to move towards a similar "economy grounded in happiness" here. First, she wanted to find out what that would mean to Americans.

"To hear out what those measures would be for the people here in the U.S., it made sense to ask people," she said.

So she started walking. The Happiness Walk launched in 2012 when she began her trek on foot from Stowe, Vermont, and walked in segments to the Pacific Ocean, arriving in Seattle in May 2018.

This summer, Francis was back in Seattle to start closing the giant circle. She turned east to begin the second half of the cross-country walk, making it to Salt Lake City, Utah, in the fall before taking a break for the winter. Francis plans to be back on the trail this spring so she can return to New England in the fall of 2019.

What people say when asked: What matters most in life to you?

Here are the top responses after the first half of the Happiness Walk:

Material well-being and money were mentioned by fewer than 3 percent of respondents, she said. Francis carefully records all of the answers to be fully analyzed when the Happiness Walk is over.

Learning to let go of fear

Though she's sometimes briefly joined by supporters when she's on the road, Francis mostly walks by herself — up to 10 hours, or about 25 miles, a day. She carries a tent and camping gear, but often spends the night in the homes of people she meets along the way.

Francis is compulsive about connecting every step of her journey, so she'll accept a ride to the next town to someone's home as long as she can get back to where she left off the next morning, she said. The Happiness Walk has been "an amazing journey" for her own physical and mental well-being, too. She learned she can be self-sufficient, confident and able to trust her gut.

"I am probably healthier today at 60 than I was when I was 50. I feel great," Francis noted.

"I've learned not to be fearful and I think that's something a lot of us have to work on. We have a lot of fear that we carry: fear of who the other person is, of what might happen, of what others might think, of not being enough. But when you let go of that, I have found a great deal of freedom and strength and hope.

"I feel blessed because I get to experience things that fear would keep me from."