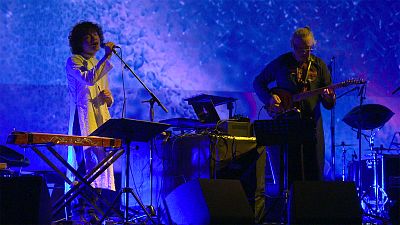 He was one of the greatest poets and philosophers of the east: Imadaddin Nasimi. Now, a new poetry, arts and music festival in Azerbaijan honors this brilliant thinker who was also a spiritual leader. The festival opened with a performance from a legend, one of Azerbaidjan's most important mugham singers, Alim Qasimov .

Imadaddin Nasimi was born here in Shamakhi, once one of the key towns on the Silk Road. He was the most influential advocate of Hurufism, a variation of Sufism which is part of Islamic mysticism. In 1417, he was skinned alive in Aleppo for his liberal religious convictions.

"He is still contemporary and progressive because so many years ago, hundreds and hundreds of years ago he was talking about multiculturalism, tolerance and for people to be unified and this is the message which we want to bring with this festival," says the Heydar Aliev Foundation's Artistic Director Emin S. Mammadov.

The multi-disciplinary festival featured various national and international artists. Among the Azeri artists Chingiz Babayev paid tribute to Nasimi with his project called "Planets". His conceptual art project wants to exploit the idea of essence existing in everything. The artist says he is spiritual himself and very close to Sufism.

Ngô Hong Quang sings and plays various traditional instruments - Guitarist Nguyên Lê was born in Paris of Vietnamese descent and is known as a jazz musician, though his celebrated albums pay tribute to rock icons like Jimi Hendrix and Pink Floyd. The two performed a fusion of ancient and modern music to portray "the soul of Vietnam".

"I think Vietnamese music is so much about melodies and the expression of emotions," says Nguyên Lê.

"Yes its also somehow more about meditation, related to meditation , and also related to the culture of language because our entire language is really strongly connected with the music so the music represents also the language of the people," says Ngô Hong Quang.

Azerbaijan's dynastic ruling family, the Aliyevs, commissioned the fabulous building by Iraqi-British architect Zaha Hadid that houses the exhibition. But across the capital, Baku, there were various art installations and performances. Among the international guests invited for the opening of the festival, Gert Naessens, the Operations & Project Manager for the European Festivls Association, gave his first impressions of the new event.

"What I have seen today pleases me very much. They are combining all disciplines, they are involving local people, they are involving also a lot of international people, so up to now I could say, yes they are on the right track," he said. Unfortunately many of the venues were far from full despite the quality of artists appearing, and many in the sudiences seemed more interested in their phones than what was happening onstage. But it's early days.

Sami Yusuf is a superstar. A quarter of a million people rammed Taksim square in Istanbul for one of his concerts. Born in Tehran to Azerbaijani parents he grew up in London. He says he comes from a deeply spiritual family and maintains people need more than ever some spiritual connection today, certainly at a time of right wing populism and young people coming from various Muslim countries living abroad.

"This alienation, this not knowing who we are, has - I think, created this vacuum of intolerance, hate and misunderstanding, so Nasimi’s message is a message we need today, and what I am trying to do with my music is to connect people to their roots, to their traditions," he said defiantly.

"Its certainly a great idea to launch a festival which promotes tolerance, pluralism and multiculturalism. Now the organizers have to prove that they can attract a regional, national and international audience," reports euronews' Arts Editor, Wolfgang Spindler from Baku.