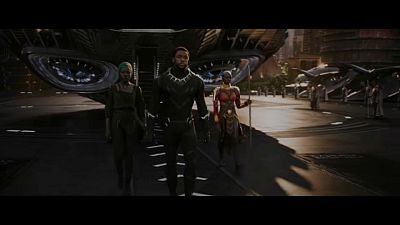 Audiences have a new superhero to savour with the premiere outing of Marvel's Black Panther.

The Hollywood premiere saw a roll call of notable African-Americans, and was a celebration of African culture, on which Blcak Panther draws heavily,

"This is...it's not just a movie. It's become its own thing. It's a movement. People are excited about the cultural aspect of it," said Chadwick Boseman, who plays the lead.

The look of the film has drawn much comment.

"The aesthetic of it is so pleasing and so black and Afro-centric and African and modern and worldly and futuristic," said Angela Basset, who plays Black panther's mother, Ramonda.

"I don't think people are aware of how rich the culture is and how diverse African culture is," said Lupita Nyong'o, who plays Nakia. "Already it's showing that a hero of African descent can still get people to come to the theaters because they've already sold more tickets on the first day than any other Marvel comic," says Forest Whitaker, who plays a royal advisor, Zuri.

The movie rolls out worldwide in mid-February, and the forecasts are it will make $120 million in its opening weekend, which would seal the franchise's immediate future.

"Black Panther" has its European premiere