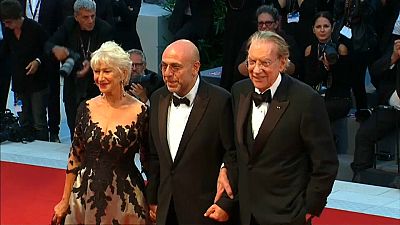 Helen Mirren and Donald Sutherland are among the stars in the spotlight at this year’s Venice Film Festival.

In Paolo Virzi’s film “The Leisure Seeker”, the pair plays a couple in bad health who escape the prospect of a future in a nursing home.

The film is one of 21 in competition for the top Golden Lion award, which will be announced on September the 9th.

Sutherland told reporters: “I loved him when he came to see me, Paolo. I truthfully didn’t see him as Italian although it’s obvious when he speaks Italian. I couldn’t understand a word he said but he seemed universal to me.

Mirrren said: “I was thinking back to ‘Midnight Cowboy.’ I think there are moments when a foreign eye, if you like, is a wonderful eye to put upon a culture or a country.

“It gives a depth and, you know, an Italian and an American looking at the American culture, American way of life, American landscape. They have an eye which is fresh and individual and uninfluenced by politics or culture or history or family or anything.

“And I think that’s a very powerful eye and I think that is the eye that Paolo brought to this particular movie. He brought his own sensibility of humor and of humanity that you see very clearly in his other movies. I think when you see this film it’s very much a Paolo Virzi movie, it couldn’t be made by anybody else. It’s full of his humanity and his humour.”

Mirren added: “It’s certainly a reflection of the way that I hope to live my life.

Another film getting its world premiere is Stephen Frears’ comedy drama “Victoria and Abdul”, starring Ali Fazal and Judi Dench in the role of Queen Victoria.

Dench, who played Queen Victoria twenty years ago in “Mrs Brown”, said she “never expected to re-play her later on”.

‘‘I must say that this story, this particular story of Queen Victoria, four years in fact after John Brown had died seemed to me to be a kind of continuance and because I had done the homework on Queen Victoria for the first bit of it … and the screenplay I think is wonderful it tells a great, great story.”

While “Mrs Brown” explored Queen Victoria’s relationship with her servant John Brown, Frears’ new comedy drama is based on her subsequent unlikely friendship with Indian clerk Abdul Kazim who was sent to England to present her with gold coins.

Kazim was only due to visit Britain briefly but Victoria took a shine to him and asked him to stay on and be her teacher. In the end Kazim served Victoria for a further 15 years.

Dench said: “Queen Victoria’s attitude towards Abdul is very complicated, not just a feeling of love but the delight of being able to be relaxed with somebody without anybody around, without anyone giving her any ultimatum or standing on ceremony in anyway, so that she was completely able to relax talk to him and learn from him and be taught by him,” she said.

Indian actor Ali Fazal takes on the role of Kazim.

He said: “There was this very spiritual aspect to this relationship which is what I Ioved about this story that it wasn’t about the two ends of the spectrum they came from or the people they were.

“She was the most strongest person on the planet at that time and yet there was something missing … and he saw through that, Abdul Kazim saw something there and they intellectually stimulated each other, they spoke about things about life and of course learnt an entire language.”

Director Stephen Frears said: “It was always meant to be funny. I thought to myself, what film would Donald Trump most like to see?”