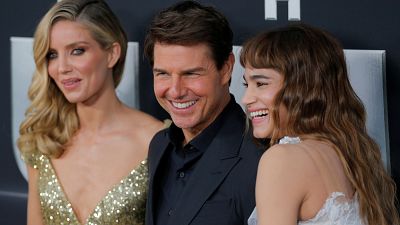 Introducing ‘The Mummy’…as you have never seen HER before!

The title role in Alex Kurtzman’s new film is played by a woman, ex-dancer Sofia Boutella.

And she couldn’t be more different from the star of the 1932 original, Boris Karloff.

“Honestly, I’m proud of our director for giving this strong powerful female role to a woman and I’m humbled that he chose me for it. And yes I am excited for all these movies that are empowering women,” said the Franco-Algerian actress, 35.

Tom Cruise stars too, meaning this horror movie brings stunts and action to the big screen.

“The film does have a tremendous amount of adventure but it has great scares also,” he said.

“It has some humour in it and romance.”

Universal was the home of horror for decades – including the original Mummy movie back in 1932.

The stars of The Mummy relive the classic monster films which have inspired a new world of Gods and Monsters #DarkUniversepic.twitter.com/yvbQfn6bsE

‘The Mummy’ for 2017 audiences kicks off Universal’s Dark Universe franchise, reviving classic creepies that made our film-going ancestors shudder.

It is already conquering cinemas around the world.