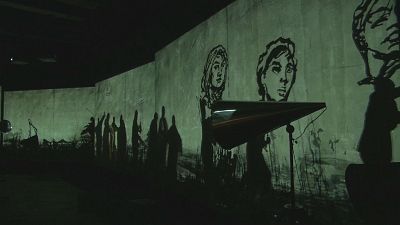 ‘Thick Time’ is the title of a new exhibition of the works of William Kentridge. It’s on show at the Louisiana Museum of Modern Art, south of Copenhagen in Denmark.

The South African artist best known for confronting dark themes, including South Africa’s apartheid, has recently created videos inspired by his love of theatre and literature.

In one the artist depicts a processional work, including a brass band playing a merry tune. But beneath there are refugees, prisoners hospital patients, all wandering through life.

The exhibition focuses on prominent works from 2003 onwards. Along with the large video installations are simple charcoal drawings for which Kentridge is perhaps best known.

“We’re showing William Kentridge’s later work from 2003 to 2016, where he has expanded his artistic practice and included a lot of his personal interests like theatre and literature in these great environments that people can enter and be surrounded by living images and sound,” explained Mathias Ussing Seeberg, Curator.

In another large installation, named ‘Refusal of Time’, Kentridge mixes opera, theatre, literature, music, film, drawing, performance and sculpture all in one work. It examines the development of the measurement of time.

The oppression and brutality of apartheid in his home country is also a theme in many of his works. Performer Joanna Dudley worked with the artist for many years.

“It’s certainly drawing on the history of South Africa, it’s drawing on his own personal history and then also for me it’s the whole world. It’s life, it’s death, it’s the celebration of life and death, it’s a celebration of birth, so it’s very human, it can be very funny, but at the same time you can cry at any minute,” she said.

Another video installation on show at the exhibition is ‘O Sentimental Machine’. It is seen as a critique of Russian revolutionary Leon Trotsky’s notion that people are ‘sentimental but programmable machines’.