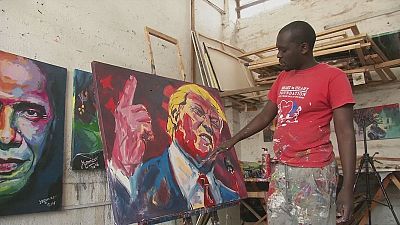 One of the most famous faces on the planet is now on canvas in Kenya the birthplace of the father of the man Donald Trump will replace in the White House.

The artist is Evans Yegon who made a name for himself painting portraits of President Barack Obama and selling them at one thousand dollars a time.

The Trump canvas captures the billionaires facial and hand expressions which the artist says attracted him to the subject.

“I decided to paint him because it’s an interesting topic and an interesting character. So the paintings show more about his facial expressions that he usually makes while he is talking and I painted him because he is hated and he is loved. There are extreme parts, some hate him a lot and some love him a lot,” the artist explained.

Obama’s presidency electrified Kenyans. Thousands saw him on his visit to the country as president in 2015. Many have expressed sadness at the impending end of Obama’s time in office.

Yegon sold 28 of the 30 Obama portraits he painted during the outgoing president’s second term. Trump just doesn’t have the same appeal in Kenya.

“The perception that people have about him, about what he said during the election, I think it was a campaign strategy. First, I did not expect him to be the president, it was a shock but now we have to deal with him for four years. Yeah, we have to love him,” he added.

Yegon admits he has struggled to get any buyers for his paintings of the president-elect. Just one Trump painting of the 10 he has painted so far has been sold and that was to an American client.

But of course, he’s hopeful that Trump’s popularity will increase.