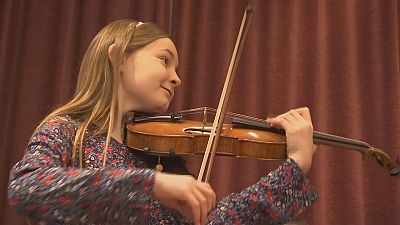 Alma Deutscher is a composer, virtuoso pianist and concert violinist who wrote her first sonata five years ago and whose first full opera, ‘Cinderella’ has its world premiere in Vienna next month.

Quite a back catalogue for an 11-year-old.

The girl from Dorking is a down to earth playful child:
“Well, for me it’s really normal. Because I don’t know anything else. How it would be not to really to compose music.”

Alma’s ‘Cinderella’ is a composer, the step-mother an opera director the step-sisters snobby divas and the prince a poet who finds Cinderella through her music.

Alma’s opera is to be premiered on December 29 in none other than capital of classic music, Vienna:“Of course Vienna is the capital of music. It’s the best place to premiere an opera. Mozart was here Hayden was here.”

She has also started to write a book, which she wants made into a film for which, of course, she will write the score.