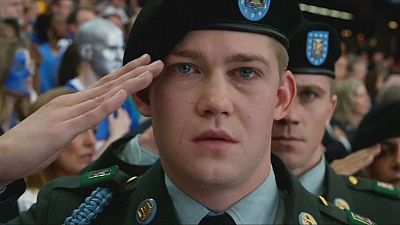 Shot in a new 120 frames-per-second format, 3D 4K, only two out of the more than 1,700 cinemas on release could show it properly. Sony were then faced with negative media after its October premiere in New York, and only just over a million dollars in first-week US box office.

Nineteen-year-old Billy is in Bravo Squad, thrown into Iraq then plucked out of it for a US victory tour after the group is involved in a fierce battle.

“Most of all, I want to be more understanding or willing to understand what soldiers experience as much as I can,” says director Ang Lee. “I’m not saying this is exactly what it’s like, but I did the best I can to portray them.”

Kristen Stewart and Joe Alwyn star, and the format added to the hyper-reality of certain sequences makes the movie an occasionally startling experience, even in an unadapted cinema or basic 3D.

“Usually technically advanced movies are just a little bit more fake. Like they are about superheros or they are about, you know, things that don’t exist,” says Stewart. “This is the absolute opposite of that. So I thought it was a really exciting notion.”

Alwyn realised the format also meant actors will have to bring their A-game in future.

“You can just see the complexion of someone’s skin, you can see the layers, you can see into their eyes. So I just had to be there and if you weren’t getting it Ang Lee would be blunt and tell you.

He’d say, ‘you’re acting too much,’ or ‘the thoughts aren’t there’ or ‘try this read.’ And you would just – that was good, it was good being told it bluntly because you don’t want it to be sugar coated, you want to get to where you need to get.”

“It had to be raw and real. I thought it was awesome, it was so cool — I was like, ‘Push me harder!’” – K on #BLLHWhttps://t.co/NQhGnp7Cizpic.twitter.com/FsuaqIlCis

The movie may recover on its global sales as it rolls out, unless Sony fail to push it, but this is a bomb for a film with such high expectations. Europe’s major markets will have to wait until early next year to see it.