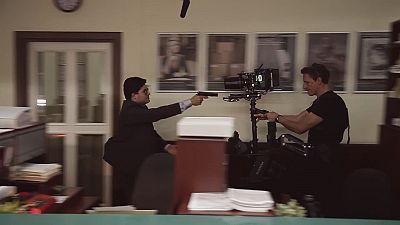 ‘Viszkis’ (‘The Whiskey Robber’) is the true story of Attila Ambrus, who became a national hero in Hungary in the 1990’s after committing a series of robberies in and around Budapest, in which nobody was hurt.

The ‘gentleman thief’ as he was known was often seen sipping a whiskey in a nearby pub before the robberies, which earned him his nickname.

Euronews met him during the shoot of the film about his life: “I was not aggressive at all when I robbed a bank,” Ambrus explains, sipping a whiskey in a bar with the film’s lead actor, Bence Szalay. “In the beginning, I was far too polite, but later on I realised you have to show self-confidence to be a proper bank robber. Bence, who plays me in the movie, does a great job.”

“I’m not just playing a simple bank robber, I’m playing Attila Ambrus, a very colourful character with a complex personality,” says Szalay. “I’ve been through hard times in my life, too, so I understand that sometimes you can get yourself into very self-destructive situations. But Attila is tough and can survive all kinds of crises. For example, he spent 12 years in prison, but today he has a job. When you talk to him, you would never guess that “he was in jail for 12 years“http://www.salon.com/2005/12/23/robber/.”

Born in Transylvania, Ambrus was abandoned by his mother and lost his grandmother at a young age. After crossing over from Romania by riding illegally underneath a freight train, he made a living through a variety of odd jobs, including as a gravedigger, a pelt smuggler and a goalie for Budapest’s main ice hockey team.

He was eventually captured and jailed in 1999. After a spectacular escape the same year, he was caught again and sent to a maximum security prison for 17 years. He was released early because of good behaviour in 2012.

“I try not to judge anyone, because I made a lot of mistakes, too,” says the film’s American-Hungarian director, Nimród Antal. “I see him as a man who had a difficult childhood. He was just one and a half when his mother left, and ten when his grandmother died. Of course, having a hard life isn’t an excuse for all the robberies and petty crime, but you always have to bear in mind how somebody’s life started out.”

For the car crash scene, the lead actor was replaced by a stuntman. “You really have to concentrate during the scenes. Many unexpected things can happen,” says stuntman László Juhász. “In this case, the wheels of the two cars got stuck together, which steered my car off course. I almost crashed. But I think we managed the situation quite well.”

Three cameras were used to record the crash scene, including one mounted on a strange-looking Mars-rover-shaped quad. A second camera on rails followed the cars, while a third hand-held camera was used to record the scenes inside the police patrol car.

Most of the action was inspired by real events. “Seventy to eighty percent of the story in the film is true, some of the wilder parts are fiction,” says the film’s producer, Tamás Hutlassa. “Today we shot his tenth robbery, from which he escaped by car in real life, too. All the car crashes in our film are real, we don’t use any tricks or computer effects, there really are two cars crashing.”

Ambrus’ story inspired Julian Rubinstein’s 2004 novel, ‘Ballad of the Whiskey Robber’, described by critics as an entertaining tale about a gentleman robber, set against the backdrop of 1990’s Budapest as Hungary moved out of cold war communism and into global capitalism.