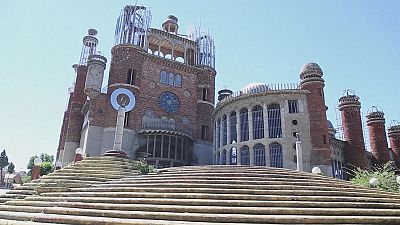 It is a modern-day Sagrada Familia that has been taking shape for more than half a century in the small town of Mejorada del Campo, on the outskirts of Madrid.

The basilica is the brainchild of 91-year old Justo Gallego Martinez, known as Don Justo. Though he has no formal training in architecture, he not only designed but also built the structure almost single-handedly, using recycled materials, such as plastic for the dome.

“I’ve done this with my bare hands. It’s all in my head. I’ve also had help, though I have worked on my own as well, of course, a lot. Nights on my own, I think about how to make the project come true,” he explains.

Partly modelled on St Peter’s Basilica in the Vatican, the building stands almost 40 metres high and has several chapels, cloisters and a crypt.

“This is all handcrafted, it’s plain. There are no straight lines, just curves, which is even more complicated to build,” says Don Justo.

Occasionally, he receives help from volunteers. Angel Lopez Sanchez, 47, first came to visit him more than 20 years ago, and has now dedicated his life to the project .

“I once came to see him and I liked what he was doing,” he says. “I saw him up there and asked him if he needed help, he said ‘Well, ok yes’. And that’s how I started helping him. I’d come every now and then, mostly weekends because I had my own job. It was like that for years. Now, it’s been years since I left this place.”

Don Justo sold his fathers’ lands to finance the project. The old man says he spends much of the day meditating and praying for guidance and inspiration from God. However, the slow pace of the project, lack of funding and his old age suggest that, sadly, he may not live to see his masterpiece completed.

In the town of Lodi, in northern Italy, a cathedral unlike any other is under construction.

The brainchild of late Italian artist Giuliano Mauri, the Tree Cathedral is made of wooden structures enclosing trees, causing them to grow in a specific manner.

“For Giuliano Mauri, the cathedral was the work of art that best represented his idea, his poetry and his artistic philosophy,” explains the artist’s granddaughter and curator of the project, Francesca Regorda. “For him, it is a work of great labour, but also of great happiness. It is an idea of splendour, to work on growth and life itself. The Tree Cathedral is literally alive.”

Eventually, the wooden framework disintegrates, leaving just the trees to shape the cathedral.

The Lodi cathedral is the third of its kind. Mauri built his first back in 2001 for an outdoor contemporary art exhibition in Borgo Valsugana in the Italian Alps.

“There is a true respect for nature in his works. They are in harmony with nature, and shouldn’t be considered as new constructions. He used to say that he was not inventing anything, but just building something that was suggested to him by nature – something that could have already been there,” says Francesca Regorda.

After Mauri’s death in 2009, his family took over his latest project in his hometown of Lodi, which is expected to be completed by the autumn.