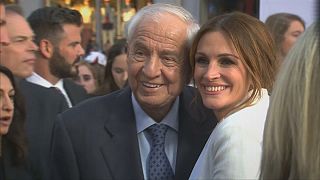 Marshall transformed the Odd Couple from a Broadway hit to a five-season TV show he directed Pretty Woman and The Princess Diaries. But he’s best known for creating Happy Days.

“Happy Days” debuted as a television series on ABC in 1974, starting a 10-year run that saw Henry Winkler’s “the Fonz” become what Variety described as a cultural touchstone. It was one of the highest-rated shows of the 1970s.

“The Odd Couple,” a hit sitcom created and produced by Marshall, began a five-year run on ABC in 1970. The show, starring Jack Klugman and Tony Randall, received Emmy nominations and wins for the comedy series based on Neil Simon’s play about two divorced men with different lifestyles who are forced to share an apartment.

He was also the man behind the TV spinoff Mork and Mindy, which launched the career of Robin Williams.

Larger than life, funnier than most , wise and the definition of friend https://t.co/k8qxEe4rIZ

Marshall was the older brother of Penny Marshall, who played the unrefined but lovable Laverne DeFazio on “Laverne & Shirley,” a “Happy Days” sequel he co-created that ran on the ABC network from 1976 to 1983.

It followed the lives of two single women and their nutty friends in 1950s and ’60s Milwaukee.

He also directed Pretty Woman, a big screen blockbuster in 1990 starring Julia Roberts and Richard Gere that grossed $463 million worldwide. Roberts earned an Oscar nomination for best actress and the film was nominated for a Golden Globe for best comedy / musical.

“The Princess Diaries,” “Beaches” and “The Flamingo Kid,” were among other popular films Marshall had a hand in putting on the big screen.

Mothers Day, his latest movie, came out in spring, also starring Roberts. Marshall explains why he liked working with the actress: “Well I know her well and it is nice to work with somebody that you could talk shorthand and understand.

“We have a common thing now, Julia and I. We both like to go home because we have a home to go to, so we move along, get it done and make people laugh. Julia is one of the great actresses.

“Everybody knows how to cry but Julia has always been one of those great actresses who knows how to not cry and still make you think something has happened and she is great at that in this movie.”

So sad to hear about Garry Marshall.He was always kind and encouraging and told me not to sweat the small stuff(flops)all love to his family