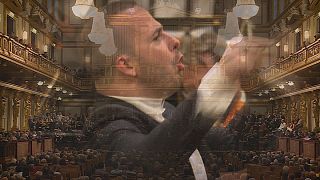 Yannick Nézet-Séguin’s conducting has been described as “fierce” – but he has been praised for being collaborative – or he is regarded as calm and controlled – but his work is “muscular”.

In truth ‘Volcanic Yannick’ is breathing a bit of fire into a very un-rock milieu and right now he is the conductor every concert hall wants to hire.

Recently appointed to succeed James Levine as music director of the Metropolitan Opera in House in New York, Yannick Nézet-Séguin’s career is, if you’ll forgive me here, quite simply erupting.

In June the 41-year-old fulfilled a life-long goal by conducting the Ninth Symphony of Bruckner, the unfinished work of the famous Austrian composer at the end of a triumphant tour with the Vienna Philharmonic in the city’s hallowed Musikverein concert hall.

“For me conducting this piece, with this orchestra, in this Hall, is possibly the greatest dream in my life come true,” he told Euronews.

Nézet-Séguin’s said the tricky composer broke new ground in his work. “Bruckner paid homage to his models, be it Beethoven or Wagner, and he fought hard to find a language of his own, which turned out to be totally unique in the history of music.”

With digital innovation abounding in other arts, it’s tempting for neophytes to conclude that classical music repertoires urgently need new life breathing into them – and now, luckily for them and younger followers too, Yannick may be just the right resuscitator on hand to do it.