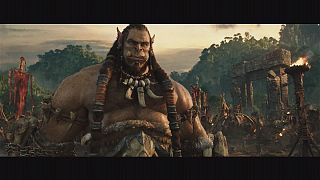 The “Warcraft” video game series comes to life on the silver screen, complete with its knights and orcs.

The film sees the human civilization of Azeroth face a fearsome race of orc invaders who are fleeing their dying world, Draenor, though a gateway known as the Dark Portal.

But how do you play a fearsome, green-skinned giant orc?
To play the creatures, the actors went through “orc camp”.

Actor Toby Kebbell, says to play an orc you had to learn to be an orc and learn to move like an orc.

“So the deal is, we create the movement for the characters, Durotan. We create their movement, we had to learn how to do that properly,” Kebbell says.

“The character is eight feet tall, you just have to move like you’re 800 pounds.”

With both sides facing destruction, human King Llane Wrynn and his best mate, Anduin Lothar, team up with orc chieftain Durotan to try to bring peace and save their families.

Director Duncan Jones, otherwise known as son of music legend David Bowie, says the film was not without technical challenges: “I think motion capture has been moving on constantly. The technology is always improving, but generally it’s used for monsters, creatures which are smashing stuff, you know action scenes.

“And what we wanted to do was to be able to sit 10, 15, 20 seconds on a close up of an orc, have him look emotionally at his wife while she’s sleeping. And that’s not something that’s really ever been done before.”