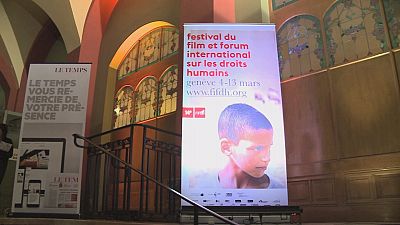 The idea behind the “International Film Festival and Forum on Human Rights”:
http://www.fifdh.org/site/fr/le- is to provoke debate and to shine a light on the unsavoury aspects of abuses going on in the world around us.

They were taught to never speak, never to reveal what happened inside their country or their families would be punished. That's why they said nothing when they left the torture camps

The festival attracts an audience of all generations with most of the screenings and podium debates over subscribed.

Isabelle Gattiker, the Festival’s director, told us what she looked for in a film for the event: “We look for the films which surprise us, which upset us, that have the particular eye of the film maker.

“These are the type of films we watch and which stimulate high-quality debates afterwards.”

The Grand Prix for best documentary film went this year to Among the Believers by Hemal Trivedi and Mohammed Ali Naqvi.

It’s about The Red Mosque in Pakistan, which has students allied with ISIL and strong ties to the Taliban. With its leader, the controversial cleric Maulana Aziz, it shows how they take children and brainwash them with their radical jihadist philosophy, with emphasis on devotion to Sharia law.

The Indian film maker Trivedi and her Pakistani co-director Naqvi risked their lives to make this documentary.

Trivedi said: “What we really want to do with our film is, actually to shift the way the way the western world invests in war on terror.

“What we really want them to do, is invest in books and not bombs as a solution to war on terror. Because we very strongly believe that war on terror can not be won.”

The Film Hooligan and Sparrow won the Peace and Reconciliation Award. It tells the story of Human rights activist Ye Haiyan, otherwise known as Sparrow, as she goes in search of justice of six schoolgirls who were abused by their principal.

Most of the film was shot with hidden cameras and shows Sparrow as she was chased from town to town by local and national secret police, and even her own neighbors.

Even the film director became a target of the Chinese police. Nanfu Wang says she was constantly in fear while filming: When we were filming, every day – outside we were followed by secret police and we were inside, the police could have come and break in at any time and take somebody away and I was constantly feared that the [video] footage will be taken or I did not know who will be arrested next.

“There are three people in the film who are still in jail, facing life sentence.”

Filmed over five years, A Syrian Love Story by Sean McAllister follows Amer Dauod and Raghda Hassan, who felt in love when they were prisoners in Syria. It’s a story of hope, dreams and despair and it won the Special Jury award.

Director McAllister had already left the festival before the award ceremony but he sent a video message of thanks to the Swiss jury for the award.

“Voyage en Barbarie” or Travel to Barbarism, won the Grand Prix of the World Organisation Against Torture. The film follows Eritrean refugees who are captured and tortured by Bedouins in the Sinai region. Its a business, the Bedouins extort a ransom from the families. The film shows one man who hung by his hand from the ceiling.

Director Cécile Allegra paid tribute to the brave young men who were willing to put their heads above the parapet and speak about their torture: “What was extremely hard was to convince these Eritreans to talk.

“They were taught to never speak, never to reveal what happened inside their country or their families would be punished. That’s why they said nothing when they left the torture camps.

“So to have their clear words, with a face, the real injuries and a real name, this is something, which to my knowledge was never been done, and that’s why we should pay tribute to these boys who had tremendous courage to tell their story.”

Film are not all about entertainment, says Euronews’ Wolfgang Spindler

“The films and discussions at this festival- show us the shattering and cruel truth of human rights violations which are unfortunately part of the every day life in our world. In this festival, films are more than entertainment.”

'Rabin The Last Day' a reflection on the nature of peace