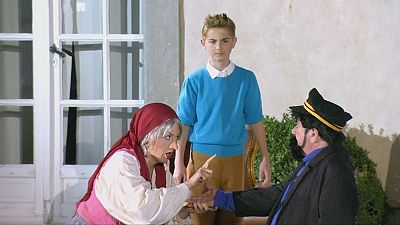 Famous boy detective Tintin has come to life on stage in a new open-air production by Opera For All.

The pressure was on for the actors to match the original characters. Thirteen-year-old actor Amani Picci, who plays Tintin, said he had never read the books before landing the role.

“I know Tintin from the cartoons so I sought inspiration there. Luckily our director, Francois de Carpentries, helped us get into character. So I keep asking myself: what would Tintin do?”

The show tells the story of eccentric diva Bianca Castafiore, who is invited to the country retreat of Tintin’s good friend, Captain Haddock, where her beloved jewels are stolen.

“The character in the comic strip is depicted as very exuberant, bigger than life. She takes up a lot of space, both vocally and physically,” says soprano Hélène Bernardy, who plays the Castafiore. “I wanted to give her a more human dimension, so the public doesn’t just want her to leave the stage because she is so exasperating, but wants her back. So I’ve tried to make her more human.”

Stage director, Francois de Carpentries, said he had always found ‘The Castafiore Emerald’ to be the most musical of Hergé‘s books, adding that turning it into an opera was a childhood dream come true.

After its Belgian run at the Château de La Hulpe, organisers hope ‘The Castafiore Emerald’ will move to France. Starting as a book character in 1929, Tintin has been in a stage show, featured in a Steven Spielberg film and been the subject of a classical music suite.