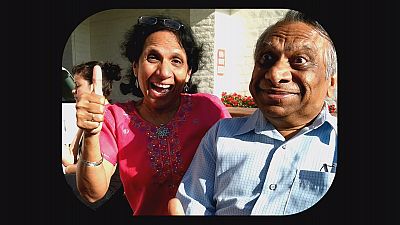 Filmed by his director sister Geeta, the documentary follows Ravi in his globetrotting quest for a mate, aided by his family from India. Ravi is quick to note that cinema goers shouldn’t expect the highest technical quality for the film.

“Well it started as a vacation video,” says Geeta. “Literally it was a home video and we we’re just on vacation.”

“Geeta just bought this new camera. She had just come off this other PBS film (Public Broadcasting Service ), which she directed, but didn’t operate the camera. And then, you know, she wanted to learn how to use the camera — which you’re going to figure out at some point — it definitely didn’t happen in time for this movie,” explains Ravi.

The film’s central conflict involves Ravi’s Indian-American upbringing. Heading into his 30s, his family questions his bachelor status, while Ravi himself questions whether arranged marriage isn’t worth a try.

“Our parents are the happiest couple we’ve known ever,” says Geeta. “And in a place in our country where the divorce rate is like the highest it’s ever been, it’s like over 50 percent now, the idea of family is totally in crisis. You know if you look at the media and all the TV shows, it’s more and more like dysfunction is in. People cussing at each other and the reality show thing. It’s like where is this aspect of, this concept of family going? And I think we both just felt like we actually see something really wonderful in our family,

Widely acclaimed on the festival circuit, the film has now found a distributor and opens in US theatres on September 11.