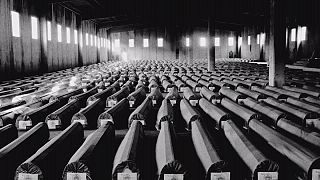 A stark reminder of the massacre of 8,000 Bosnian Muslim men and boys by Bosnian Serb troops twenty years ago.

While I walked beside the human body parts that animals had dragged all over the forest I realised I could not be just an observer because anyone who sees such a crime must be an informed and responsible witness.

These chilling photographs were taken by Bosnian photographer Tarik Samarah, who spent nearly a decade documenting the killings at the hands of Bosnian Serb forces.

His work now forms an important reminder of the atrocities, attracting thousands of visitors to this Sarajevo gallery which opened three years ago.

“After having spent the 1992-95 war in besieged Sarajevo, I went to eastern Bosnia. Although I witnessed the killing of civilians on a daily basis in Sarajevo, nothing could have prepared me for the sights that awaited me in the forests of eastern Bosnia,” said Samarah.

Samarah says he felt compelled to capture what he saw to help ensure it would not be forgotten.

“While I walked beside the human body parts that animals had dragged all over the forest I realised I could not be just an observer because anyone who sees such a crime must be an informed and responsible witness,” said Samarah.

Some among the handful that survived did so by pretending to be dead and hiding under corpses.

Samarah photographed their lives and the painstaking work of finding the location of mass graves.

He also captured the exhumation and identification of victims’ remains and their proper burial.

Thousands of people from all over the world come here to try to understand what happened two decades ago.

“The question that kept coming to my mind was ‘where was the rest of the world’ and I am ashamed to say that, even though I am a lawyer and a reasonably sophisticated person I think, that I do not know enough details to begin to answer that question for myself,” said Steven Rioff, an American visitor.

The massacre of 8,000 Muslim men and boys took place in just a few days.

Helle Wagner, a visitor from Denmark said: “I think it is very important to keep these memorials to prevent it from happening again. In Denmark, we participated in World War II, and the young people in Denmark say ‘why do we have to hear about it, it was ages ago.’

“But I think that it is important that youth is educated about this because it might as well, it is happening, right now, it is happening again. So to prevent it from repeating itself, we need to know about it,” Wagner added.

After the killings, the victims were buried in several large mass graves which were later dug up with bulldozers. The remains were later scattered over different smaller secondary graves to cover up the scale of the slaughter.

So far, 6,930 victims have been identified and forensic teams continue their work to locate and identify the remaining victims.

Samarah manages the gallery and has exhibited his work around the world. He says it is his small way of paying tribute to the lives lost.

“The 7/11/95 Gallery, the first memorial gallery dedicated to Srebrenica of which I am a founder is the result of my work. It educates young people on daily basis, and not only them but also the people who visit throughout the year,” said Samarah.

The Srebrenica massacre was the bloody climax to the brutal Bosnian war that claimed an estimated 100,000 lives.

Serbia has stopped short of describing it as genocide, although it acknowledges that a “grave crime” took place.

The UN war crimes tribunal for the former Yugoslavia has ruled the massacre, the worst mass killing on European soil since World War Two, was genocide.