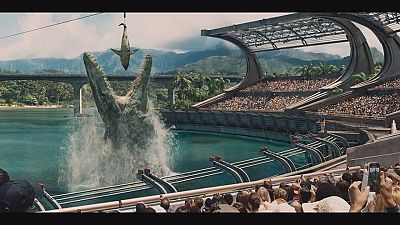 ‘Jurassic World’ is the fourth in outing for the well-loved dinosaur drama, and when the film was premiered in Paris, the stars said that many of the people working on this latest installment had been fans of the original, made 22 years ago.

If you didn’t see the original and/or want a quick refresher, here’s the trailer for Jurassic Park

The generation of fans who made Jurassic Park an iconic movie for kids everywhere have now grown up, and a few lucky ones found themselves working on Jurassic World.

Chris Pratt explained: “It is a film made by fans. I know I definitely am, Colin Trevorrow our director is, Bryce (Dallas Howard) is, the whole cast. We all come from a generation that was swept up by the original movie.”

Bryce Dallas Howard agreed: “I think we feel pressure as fans ourselves. We just want this movie to be great and to honour the legacy of ‘Jurassic Park’.”

Jurassic World’ takes place 22 years after ‘Jurassic Park’, and is set at in dinosaur theme park on Nuba Isla.

Facing dwindling attendance, a new attraction is developed to spark interest in the theme park, but it backfires massively when the genetically-modified hybrid dinosaur Indominus rex, which is larger than a T-Rex, begins to wreak havoc in all directions.

Here’s the trailer for the new film

And for more information see IMDB