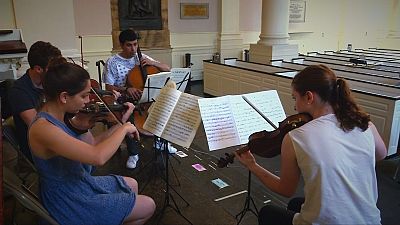 The Polyphony Foundation aims to bring young Arab and Jewish musicians together. The foundation was created in 2011 by New York residents Deborah and Craig Cogut and Nazareth-born musician Nabeel Abboud-Ashkar, who said: “The focus is on music and music making, but the purpose is beyond that. It’s really to give young people from both communities a chance to interact and to become more familiar with the other. Believing that this will have an effect on the society, the Israeli society at large.”

The Foundation is based on the idea that music can help communities in conflict work together to solve problems, reconcile differences and build civil society.

Mahdi Saadi, a cellist, said: “When we started people around us they didn’t have – they didn’t expect a lot from us. They didn’t believe in us. Like for example if you talk just about an Arab playing classical music not everybody believed that an Arab would go around the world and play concerts and classical music. But we’re doing a change. In the past we’ve always heard that yes, Arabs and Jews can live together, now we’re proving it. And it’s a big change for Arabs and Jewish.”

In addition to performing well-known classics, Polyphony Foundation musicians also play songs by Arab-Israeli composers. The Foundation has attracted support from a range of celebrities, including Cher.