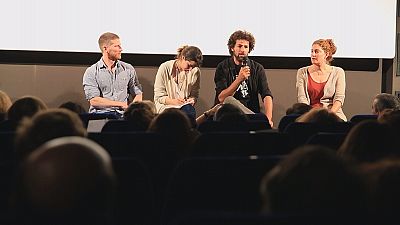 Smauel Lehoux, one of the festival’s organisers, said it was not supposed to be a political event. “Before anything else this event is about films, about their content, and not about any related politics. And also, this festival demonstrates an interesting diversity in the cinematic approach. So that makes this a cultural and artistic festival.”

‘When I Saw You’ by director Annemarie Jacir was screened at the opening of the festival. Set just after the 1967 6-Day War, the film follows the fortunes of Palestinians in a refugee camp.

Annemarie Jacir said the film was based on personal experience: “My family is from Bethlehem, which was occupied in 1967. I was interested in doing something about this time period that was a tragedy for the Palestinians, but also a time of great hope. All over the world, not just in Palestine, but everywhere, young people were trying to do something to change their lives: student movements, anti-colonial movements, civil rights; there was something very special happening.”

When I Saw You Trailer

Over the last decade, despite the lack of resources, Palestinian cinema has confirmed its place at international festivals. A return to the past, and a sense of derision are two of the characteristics of many Palestinian films shown at the festival in Paris.

The documentary by Amer Shomali, ‘Les 18 Fugitives’, is also based on personal experience. In 1987, at the start of the first Intifada, the inhabitants of a Palestinian village near Bethlehem buy 18 cows from a sympathetic kibbutz in an attempt to achieve food independence from Israel.

Amer Shomali explained: “The Palestinian archives from the first Intifada come from the foreign press. They treat the Palestinian question according to their own agendas. Those who are pro-Palestinian portray them as martyred victims, and those who are anti show them as terrorists burning tyres and throwing Molotov cocktails. The press has never shown ordinary Palestinians going about their daily lives: milking cows, keeping chickens, helping their children do their homework.”

‘A World Is Not Ours’ is a very personal documentary by Mahdi Fleifel about being a Palestinian growing up in Dubai, and Denmark, and going back to visit friends and family in a refugee camp.

A World Is Not Ours trailer

In his documentary, ‘Infiltrators’, Khaled Jarrar follows the Palestinians, who despite the risks, try to get over the wall to work or see relatives: “Very often, when I was filming,” he said, “Israeli soldiers would arrive, shooting at us or throwing tear gas canisters. And I was forced to escape, leaving the camera running. I’ve used some of this footage in my film.”

The Palestinian Cinema Festival hopes to help new Palestinian talent distribute their films in France, where for now, only the biggest films are screened.