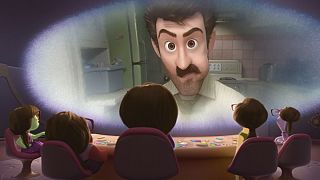 Inside out is the latest release from Disney-Pixar, and was shown out of competition at Cannes this year.

It is about a girl called Riley, whose life is turned upside down when her father starts a new job in San Francisco. Riley copes by taking advice from imaginary characters embodying emotions including joy, anger, fear and sadness.

John Lasseter, the Chief Creative at Pixar said: “It was really exciting to make this film. It was a long journey. We did a tremendous amount of research to get the details right and understand what science and psychologists and everybody knows about emotions, memories and the way the mind works.”

Pete Docter, the film’s director said: “My daughter was about nine when she did the voice of Ellie in ‘Up’, and then she turned ten, and eleven, and at the beginning of this film I saw her looking a lot less energetic and more quiet and reserved and I thought, “What’s going on in her head?” And you know that’s what started us working on this film, and I think all the films we do, whether they are about monsters or fish or cars, we want to project something of our own lives and put them on screen so that the audience recognises their own experience.”

The film has been so warmly reviewed by critics that some people have been wondering why it wasn’t entered into the competition at Cannes. Could it be that opening the film at Cannes, out of competition was a good way of gaining international attention without risking snubs from the jury?