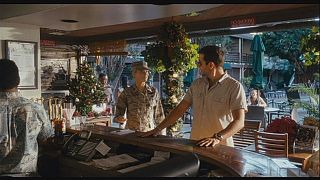 Aloha, set in Hawaii, starring Emma Stone and Bradley Cooper, is a military rom-com. The two A-listers said that making the film really was as fun as it seemed. They said they loved making the movie, and in particular loved the script, written by Cameron Crowe, who also directed the movie.

“What one loves about working with Cameron is the fact that he writes dialogue that is so captivating,” said Bradley Cooper. “It’s so tantalizing to your mouth. I mean, it’s just fun to say the words in the melody with which he wrote them.”