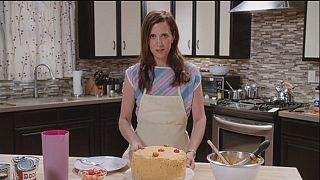 A woman with borderline personality disorder wins the lottery and decides to spend the cash on her own talk show.

Against all odds, the show becomes a massive hit. Chaos ensues when her larger-than-life personality and obsession with being famous begins to alienate her friends and family.

It’s film director Shira Piven’s sophomore movie: “There is a kind of a wonderful and strange collision of mental illness and our kind of media-reality TV culture. And I think they sort of become mirrors of each other. I think seeing this woman with mental illness buy her own talk show, we kind of learn something about how scary that whole world of, like, ‘I want to be televised’ is,” she says.

The film stars Kristen Wiig as Alice Klieg. The Saturday Night Live celebrity has been highly praised for her performance as the mentally ill Alice, whom she plays with bipolar brilliance according to one critic.

“We never went for the joke. We tried to go for reality, I guess,” says Wiig.

“Yeah, it’s not a comedy in the usual sense,” adds Piven. “The goal is not how many laughs we can get, put the jokes in. It’s really a story, we really had to tell the story as honestly as possible about this woman, and the comedy comes from the fact that she does absurd things in order to live her life.”

Co-starring James Marsden, Wes Bentley, Joan Cusack and Tim Robbins, the film has been described as funny, dark, and riding a very fine line in its depiction of mental illness.

‘Welcome to Me’ is out now in the US.