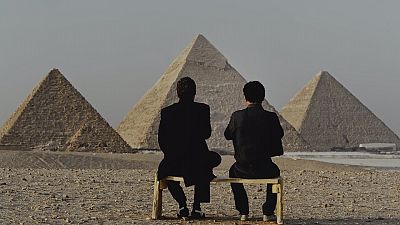 The Cinémas du Sud festival in the French city of Lyon is a chance for European movie-goers to discover cinematic gems from North Africa and the Middle East.

Among the films screened for this 15th edition was ‘El Ott’ by Egyptian director Ibrahim El-Batout.

It stars Egyptian actor Amr Waked as a gangster who challenges a notorious mobster, a kidnapper of street children for organ trafficking. Egyptian acting legend Farouk Al-Fishawy plays the baddie, a silent character who represents evil throughout the movie.

Waked, who also produced the film, says organ trafficking in Cairo is an alarming issue: “A while back, I read about these dismembered bodies of children being discovered in tips. I was very shocked to find out that this really does happen,” he told euronews.

The story is inspired by the ancient Egyptian legend of Osiris, murdered by his jealous brother and dismembered into fourteen pieces: “The Egyptian myth of Osiris was the first story about a dreadful dismembering, and later became the symbol of resurrection and life after death,” said Waked.

“In every religion, the body is sacred – under the pharaohs, in Judaism, Christianism (sic) or Islam. But today, we have reached a point where we no longer respect the human body, we treat it with contempt,” he added.

Altogether, nine films from North Africa and the Middle East were screened at the festival, whose main goal is to raise awareness about Arab cinema, offering an innovative perspective on the recent crises that have shaken the Arab world and on the suffering of the Arab people.

The festival’s opening film ‘Before Snowfall’ tells the story of Siyar, an Iraqi Kurd who sets off on a journey to Europe to find his sister who has fled an arranged marriage. As the eldest son, he is obliged to find his sister and kill her to restore his family’s honour in the village.

It took director Hisham Zaman two years to find the actor who would play the lead role: “This boy, we used his own costume – his jacket, his shoes – we wanted to keep this authenticity, the way he is. This boy had no experience with acting and he’d not been outside Kurdistan. So he really was this village boy that I had described in the script.”

On the way, Siyar meets a young girl and they travel together. Their journey through Greece, Germany and Norway turns into a quest for dignity and love.

“The victim in this film is not only the woman, it’s also the man. The boy is also a victim. He could be just like any boy, a European boy or a Norwegian boy, but because destiny has judged this boy to live in that geographical area, where war is a part of their life, he’s affected by this, he cannot learn from school, but he has to learn from life,” said Zaman.

With its gritty realism and non-professional actors, ‘Before Snowfall’ lies somewhere between fiction and documentary, a rapidly growing and increasingly popular cinema genre in the Arab world.