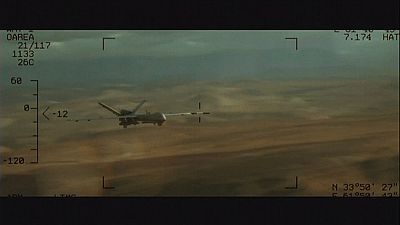 “Good Kill” is new film about a fighter pilot who struggles with feelings of detachment after becoming a drone pilot.

Ethan Hawke plays the airman in a moral maze in director Andrew Niccol’s drama. Hawke says his ignorance about modern warfare is what drew him to the project.

“Well, it’s a subject matter most of us don’t know much about. We read in the paper there was a drone strike in Yemen, or there’s a drone strike. And I don’t think any of us really know what that really means,” said Hawke.

The role and purpose of technology is at the heart of the film, as well as its effects on human relationships.

“What’s interesting is the issues the movie touches are extreme. How technology is affecting warfare. Now, not only do you not have to like see your enemy, touch your enemy, you don’t even have to go to his country to meet anybody who ever met the guy,” said Hawke.

“We can feel like we can reach anywhere and know anything and the same time it does kind of makes you feel disconnected from every thing.”

“My character’s experiencing a spiritual crisis of sorts that is, it’s strange because in a lot of ways it’s not motivated by right and wrong, it’s motivated by, he misses the honour of the old way of fighting. It’s almost like the old F16 fighter is now like a Samurai or something. It’s just a thing of the past,“said Hawke.

“Good Kill” begins its release across Europe this Friday.