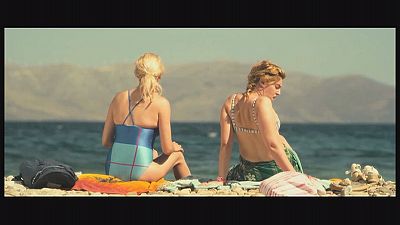 Set against the backdrop of Greece’s financial crisis, ‘A Blast’ tells the story of Maria who one day decides to leave behind her life, which no longer makes any sense to her.

From carefree days on the beach and her passionate love affair with her future husband Yannis, the film shows her descent into nervous breakdown faced with single motherhood and financial ruin.

“It’s the story of a woman who decides to change her life radically. She fights against all the people she loves, her family, and even herself. Why? Because she wakes up one day, during the Greek financial crisis, and no longer recognizes herself. She doesn’t know who she is anymore. She needs to find a way to gain back her self-esteem,” says director Syllas Tzoumerkas.

Premiered in Locarno in August, the film has been touring the film festival circuit to critical acclaim.

Thirty-six-year old Syllas Tzoumerkas belongs to a new generation of Greek filmmakers whose movies deal more or less directly with their country's economic and political crisis.

“The film is not based on a true story about a particular person. But it stems from the experiences of a whole generation, a generation deeply affected by the financial crisis our country has been going through in recent years,” he says.

put here the text you want to be clickableAngeliki Papoulia stars as Maria, who gradually faces the grim realisation that the small shop she runs for her wheelchair-bound mother is in deep financial troubles. With three young children to look after, her anger against her parents, her absent husband and the country’s economic situation explodes in an impressive crescendo.

“Not only is she an amazing actress and one of the best in her generation, but Angeliki Papoulia is also very courageous in everything she does. It really is something very rare. Maria, the woman she plays, is completely like her,” enthuses Tzoumerkas.

Out now in Greece, ‘A blast’ will hit cinema theatres in Germany, Poland, the Netherlands, and Italy next spring.