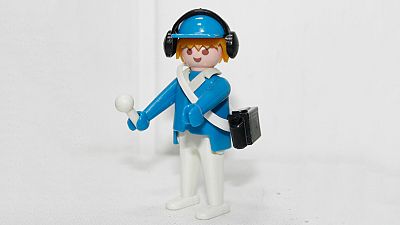 The story of the Velvet Revolution is being reproduced for children in animated form in the new 2014 film ‘What To Tell The Kids?’

The Revolution began in Prague on November 17, 1989. It eventually resulted in a non-violent handover of power in the former Czechoslovakia and spelled the beginning of the end for communism in the country.

‘What To Tell The Kids?’ aims to capture the excitement, the brutality and the surreal repression in a nation the revolution’s leader Vaclav Havel dubbed “Absurdistan.” On December 29, 1989 Havel became the country’s first democratically elected president in half-a-century.

Renowned puppet designer Miroslav Trejtnar and filmmaker Tana Markova teamed up to make the film for a generation of children who have only ever known democracy.

“In fact, the ideal situation now would be if this project inspires other people to do something similar. To meet, record and make a similar film. There were thousands at the demonstration and we had neither the ability or the intention to talk to them all. But somebody else could do it. And perhaps it will inspire children to have a greater interest in history and the history of their families”, said Miroslav Trejtnar.

In the film, parents choose a toy and tell their own story by moving it around on a big map of Prague.

The toys are then animated to play out the events which led to the fall of communism in Czechoslovakia.

One of the participants, Daniela Kramerova, vividly remembers the revolution.

“For me, it is tough to explain the overall atmosphere of the time to them…” she explained. “What we could do, what was banned, what would get us into trouble and how complicated everything was. Actually, how complicated it was to let others know about the demonstration. For example, that it was impossible to publish it in the newspaper, or broadcast it on television.”

The film took around four years to make, with funds raised through a crowdsourcing campaign.

‘What to Tell the Kids?’ premiered in the open air on the same Prague street where police clashed with students 25 years ago.