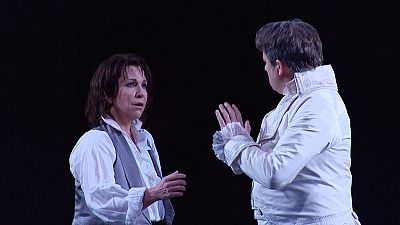 An opera about betrayal and forgiveness, love-lust and love-friendship: ‘Clemenza di Tito’, Mozart’s last ‘opera seria’, which was composed just before his death, was recently staged at Chicago’s Lyric Opera.

It is a complex, extraordinary, musically innovative piece of work, as Sir Andrew Davis explains. He has been the musical director of Chicago’s opera house since 2000.

“Mozart had written pieces with obbligato parts for instruments throughout his career but Clemenza contains two of the most remarkable – ‘Parto, parto’, for Sesto, in the first act with this wonderful clarinet obbligato, and then the Vitellia’s aria, which has an obbligato part for the basset horn,” he explained.

“There are some great choruses and you see some stylistic changes: for instance, the very end of the opera has this very interesting syncopated rhythm, which sounds very much like Beethoven to me. So, where was he going?”

Sesto is probably the most complex character. In this performance it is sung by the charismatic American mezzo-soprano Joyce DiDonato.

“I find Sesto immensely human: he’s incredibly vulnerable, subject to this uncontrolled lust and love that he has for a woman,” she said.

“At the beginning he has two roads, one is loyalty and morality, and the other is betrayal and satisfaction with Vitellia, and he chooses the wrong road. It’s excruciating when you’re watching somebody fall, and you can see it, and he even knows it himself, and yet he can’t control himself.”

In the 1950s Lyric Opera was nicknamed ‘La Scala West’, and the great stars, such as Callas, never missed an opportunity to sing in Chicago, a city which among the many masterpieces of modern and contemporary architecture also boasts this much-admired theatre.

“The ceiling is the thing that I adore; so, very often, if I’m listening to auditions, I would lean back and just stare at the ceiling – which has nothing to do with whether I’m enjoying the singer or not,” Sir Andrew Davis told euronews.

“It’s one of the Art Déco treasures of the world. And it was a building that was built before the Great Crash, so it kind of has the extravagance that we haven’t seen since.”

We asked Joyce DiDonato what she would say to Mozart if she could meet him.

“You know, you read his letters and his mind goes from here to there, from there to here, and so part of my conversation would probably be just keeping up with him. But if there was one message I would want him to know is that whatever sacrifices he went through and suffering he went through it was worth it, because he has transformed the world!”

For more excerpts of our interview with maestro Sir Andrew Davis and mezzo-soprano Joyce DiDonato, please click here
The pains and pleasures of ‘Clemenza di Tito’