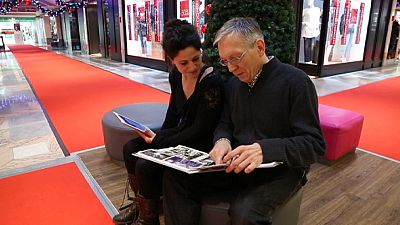 A young person’s life today is made up of many choices and much uncertainty.

People have never been more connected, yet finding – and keeping – a job can be a real challenge.

The gap between young and old is growing. Compared to previous generations, young people today are more likely to be unemployed, stuck in short term jobs and earn less. The question is: are we heading towards a generation conflict?

Carina and Ernestine are in Paris to launch a film about families and generations.

For their movie, they collected hours and hours of archive material from various countries.

Do these family portraits of the past have resonance with today’s youth?

“I look at previous generations, like my parents’, and I think life was easier before,” says Carina Engenheiro from Portugal.

“I have a lot of questions: will I be able to have a family, raise children or buy a house?” she asks.

Ernestine Cissé from France agrees: “I think it is harder for the new generation. When we’re finished with our studies, it’s hard to find a job. Either we are too highly educated or not enough. Of course that has an impact on our lives and whether we can afford to be independent.”

French sociologist Denis Monneuse has been studying the relationship between generations for his new book “The young explained to the old”.

“I don’t think there is a generation conflict today because members of a same family often help each other out,” he says.

“When it comes to the work place, it’s not so much conflict as competition. Sometimes there is a sense of competition because young people who are looking for work are often highly educated and skilled, they often speak much better English or other foreign languages than the older generation, they are IT literate, so some older employees feel threatened by this young generation,” says Denis Monneuse.

To make their movie, our young film-makers relied on collaboration between generations. They worked together as part of a team of 30 people of different ages, backgrounds and origins.

Their project was backed by the European Commission’s Grundtvig programme, which focuses on adult education and “alternative” education courses across the EU.

“Red Happiness” is part of a work project called Back to the Roots/Back to Our Origins. It was premiered at the Family Film Festival in Saint-Ouen, near Paris.

The man behind the short movie is French director and film-making teacher Julien Lahmi. The idea of an inter-generational film project was his.

“If you ask young people to talk about their lives, that’s too harsh, it’s painful,” he says.

“But if you ask them to talk about their lives through other peoples’ lives, then there’s a real dialogue. And young people facing problems today have a lot to learn from past generations. I don’t think they view them with jealousy or envy, no, I don’t see any conflict there,” he concluded.