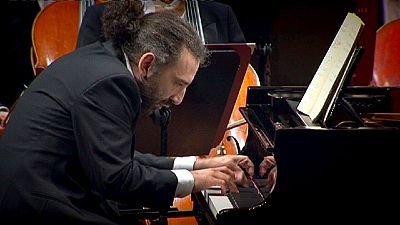 Stefano Bollani explained how he felt about playing the piece: “With the exception of the 2nd movement, the piece is very energetic, it’s full of accents and small details – which is what, I think, Ravel thought was ‘jazz’. Not so much the improvisation aspect, but rather all these irregular accents which sound like an American big band. And it’s not by chance that this concert was written after he’d been to America and had been able to hear jazz for real.”

Bollani provided further insights when he spoke to euronews: “Ravel was called ‘the Swiss clockmaker’ by his ‘friend’ Stravinsky, because he was extremely good at working each tiny detail whilst having quite a detached attitude. Of course you should not perform it in a ‘cold’ way, but you can add a kind of ‘ice coating’ to it, which is appropriate to Ravel, and I think he would have liked. He’s often considered a Romantic composer, but in my opinion that ‘sugary ingredient’ is absent in Ravel’s music.”

So how does a world-acclaimed conductor such as Daniel Harding feel about a jazz musician like Bollani interpreting a classical piece? He was positive about it: “What I really like is that there’s a completely unpretentious thing about the way he plays it. He loves the music, he has a great feeling for the kind of incessant drive of it. In the second movement, with this extraordinary, beautiful harmonic line and of course as a jazz musician his ear for harmony is fantastic, but maybe his way of approaching it is not quite the same way as ours, and there’s something beautiful about the kind of child-like honesty with which he approaches it. He plays the piece in a way that makes me love the piece, or reminds me that I love the piece, and that’s great.”

Bollani added: “When talking of this concert everyone refers to the second movement, which is certainly the least jazzy of the three, but the most difficult to play for the pianist; it doesn’t look so when you look at the score but it’s quite difficult to keep that kind of tension all the time; that’s exactly where I’d like to add my ‘ice coating’ because it’s a very ‘Mozart-like’ piece, it’s very inspired but also very posed, and as this music is so beautiful the risk is to let yourself go and play it all cantabile (meaning ‘singable’ or ‘songlike’). Now, as it’s over eight minutes long if you play it all cantabile it won’t sound cantabile at all. So, you have to choose accurately when you want to move the audience, and move yourself as well.”

In this story you can hear segments of Richard Strauss’s ‘Thus Spoke Zarathustra’ and Maurice Ravel’s Piano concerto in G.

Special thanks to the Hotel De Russie in Rome that kindly provided the location for the interview with conductor Daniel Harding.