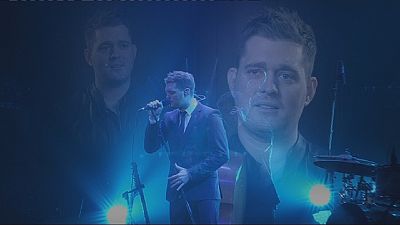 He is the king of swing, pop, jazz, and the charts: with over 30 million records sold, Michael Bublé is enjoying a triumphant world tour.

During the interview he gave euronews in Gdansk, Poland, he could not help mentioning his Italian grandfather, who opened the doors of music to him – and more.

“Our relationship is that of two best friends about 25 years old.

“Musically there was a nice connection for us because I had become a fan of the Great American Songbook, he happened to be passionate about [it] too… and so our passion met. It only added to the fuel that would be our friendship, and having that common interest made the burn much brighter.”

A sensitive and thoughtful man, but still a rational person, Bublé had no doubt that intuition and gut-feelings are always right.

He told us: “I listen to my guts. I really don’t listen to anybody else. The problem isn’t whether or not you listen to [them], the problem is whether you actually take heed of what your guts say, because my guts will tell me something is right or something is wrong, but then it is I who make the decision of whether I shall go down that left or right path; and I’d be lying to you if I told you that I take the right path. I often don’t. My guts are always right, I just know sometimes I’ve made the wrong decision.

“I was an insecure young man. I was insecure on stage as well. I cared more about getting a cheap laugh than I did about singing a song straight through.

“The truth is that I didn’t get smarter, or wiser, or more mature after I’d been really hurt, pretty devastated, after a few relationships. I finally took the time to look in the mirror, and realised that I wasn’t the man that I knew I could be.

“I know I’m a better performer [today], I’m a better storyteller, but as a man maybe I’ll never feel I’ve come even closer to perfection, to the man I’d like to be – to my grandfather.”

Finally, we asked him to finish this sentence: ‘Deep down I’m a frustrated… ?’

Bublé‘s reply: “… a hockey player! definitely, a terrible terrible hockey player. I love hockey! I stayed up last night till 6.30 in the morning only to watch my beloved Vancouver Canucks be ousted out of the playoffs by the Los Angeles Kings – and you know hockey is really important in Los Angeles,” he said, shaking his head.

This exclusive interview contains segments of the following songs: ‘I’ve got you under my skin’, ‘Cry me a river’ and ‘Everything’.

For more excerpts from our interview (in English) with Michael Bublé, please click on the following link: http://www.euronews.com/2012/05/16/interview-with-michael-buble/