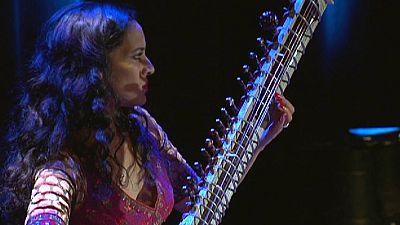 Paris could not be missed in Anoushka Shankar’s European tour. With her latest work,Traveller, Ravi Shankar’s daughter traces the Indian roots of… flamenco.

The show blends the passion of gypsy music with the hypnotic sounds of Indian classical music.

Anoushka Shankar said: “For me making music is obviously something I love to do, but it’s also a way to explore… so to make an album that is in a genre that is completely new to me, was almost like taking myself out of my comfort zone and having to survive, in a way.

“So I had to learn a lot about flamenco, but also just the feelings, the sentiments behind different forms, and where they come from and why… but it wasn’t just about flamenco, I think that anytime you do something like that where you take yourself out of your ‘known’ area, then you grow as an artist, you grow as a person.”

She added: “Actually Indian classical music is my greatest inspiration, that’s what I’ve trained in and that’s what I do, and it’s something I look back to all the time, but somehow I had to free myself of it in order to come back to it and claim it as my own.

“That was a bit of a difficult process at the beginning because I was afraid of being perceived as abandoning the tradition, or diluting it… it’s not just the tradition, it’s also my father’s music.

“I think it’s a process you need to go through, you need to kind of leave your parent a little bit, or your tradition a little bit, you need to leave to find yourself, I think. And again the irony is that I feel really close to Indian classical music, closer than I did before I started leaving it a little bit, because it made me realize how much I love it.”

Anoushka Shankar lived most of her life between two continents: in India, in her New Delhi home, and in San Diego, California, where she studied.

She explained: “Living at cross continents was certainly good for me, I found it very freeing to be forced to transcend a lot of the bounderies that we live in, in the sense that we associate so much of our surroundings with our identity, we take on habits that become who we are. To live in a way that I was constantly being forced to re-examine those habits or ideas meant that I was growing up in a way, that I had to find myself beyond all those things. And there’s also a real sense of confusion that arises from that, of course, and I think that could be good for an artist as well because it makes you search… and that’s a good drive.”

In this story you can hear segments of the following pieces: “ISHQ”, “Bhairavi” and “Inside me”, all taken from Anoushka Shankar’s latest cd Traveller (Deutsche Grammophon).

For more excerpts from our interview with Anoushka Shankar please click on the following link: euronews.net