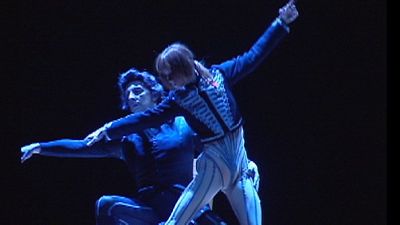 Three world stars on one stage: the French dancer Sylvie Guillem, the Canadian director Robert Lepage and the British choreographer Russell Maliphant who have between them created “Eonnagata”.

Together they explore the story of the Chevalier d’Eon who worked at the court of Louis XV in the 18th century.

He is believed to have been the first spy to dress as a woman to carry out his espionage missions.

Sylvie Guillem said: “This is a man who was a diplomat, a captain of the guard, but who could also easily slip into the role of a woman because he was young and very handsome with no beard. So he was a spy. He was someone very cultivated, who wrote a lot, and who gave the impression of being very high class.”

The director Robert Lepage explained: “It’s a question about gender but it relates back to the myth of gender. Of course the character that we are depicting is a historical character, so we happened to tell a story and we take the stand that he probably had both sexes.”

Light is a central part of Eonnagata.

Choreographer Russell Maliphant said: “It changes the shape of the space so that the space can breathe, and that’s the way that it can become a choreographic element. It also changes the graphic relationship of the viewer to the space. It can paint.”

And the culturally diverse costumes were designed by the late fashion icon Alexander McQueen.

Sylvie Guillem said: “It’s precisely the complexity of the genre, the dual quality of the genre – the sexuality, the disguise that we’ve brought from Japan. That’s why it’s called Eonnagata. We’re referring to the Onnagata, who are the male dancers who give magnificent interpretations of women. For me they have an incredible refinement and elegance.”

Eonnagata was a shared adventure for the trio to explore new ground and to fuse the world of theatre and dance.

“I’d say that the three of us are equally directing this and equally choreographing this and writing this,” said Lepage. “We’ve developed this kind of trust that makes us believe in each other’s judgement.”

The performers have said it has been a true learning experience – as the successful tour has taken them all over the world.

The team will stay on the road until the last curtain falls next year in Japan.