A shoe-box sized spacecraft launched today to test a solar sail, a unique technology championed by famous astronomer Carl Sagan. The spacecraft relies on the accelerative ‘push’ of photons from the Sun to accelerate through space, a technique known as solar sailing. It could allow probes to explore the distant reaches of our solar system and beyond without relying on heavy and expensive rocket technology.

The test probe, called the LightSail, rode piggyback on an American military space launch using an Atlas V rocket. The device is not expected to go far, and it won’t last long, but it should demonstrate that the sail technology functions properly in space and the orientation devices on board are capable of manoeuvring the craft. The key technology is the sail itself, made from a silvery material called Mylar that is only 4.5 microns thick, about one fourth the thickness of a black rubbish bag. An impressive total of 32 square metres of Mylar have been carefully folded up inside the LightSail spacecraft, and will unfurl once it reaches orbit, producing a huge ‘sail’. 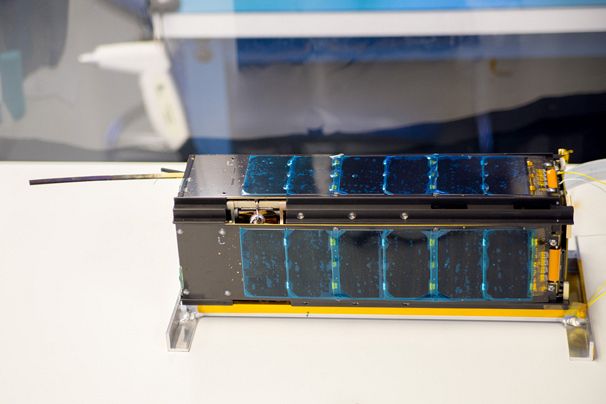 One of the key elements of this flight is to test that process of unfurling, and make sure the material spreads itself out properly across the four semi-rigid tape-measure style tracks for the sail. The other is to test the gyroscopic steering system, which will orient itself in relation to the Earth’s electromagnetic field, a little like migrating birds.

The project is unique in many ways, not least because it was funded by space enthusiasts through The Planetary Society, founded by Sagan in 1980. The people of planet Earth could well enjoy the show from this first solar sail flight, as the satellite should be visible at night, it’s 32 square metre sail glinting from around 100km high until it succumbs to Earth’s gravity in a few weeks’ time.

If all goes to plan, the Planetary Society will launch another LightSail in 2016, aiming for an altitude of 750 kilometres, with the aim of staying in orbit around Earth and serving as a further test-bed for this promising technology.

The vision, shared by the many, is that solar sails can carry probes to Pluto, or beyond, by taking advantage of the slight push from the Sun’s photons, which offer a constant level of acceleration to the spacecraft. While photons have no mass, a photo travelling as a packet of light has energy and momentum, and the lightweight mirrored surface of the solar sail uses the push of reflected light to gently go faster and faster away from the Sun.

The theory is that it could reach some impressive speeds, according to Plantary Society spokesman in Ireland Kevin Nolan, who told Euronews: “The spacecraft has continuous acceleration, which is very useful for long-duration missions. Theoretically it could get up to several thousand kilometres per second, and then once it escapes the solar system it could be pushed with a laser from Earth.”

Proponents of the solar sail technology, including Sagan himself, envisage these spacecraft sailing and tacking around the solar system, and wafting out to the nearest stars. For that, far bigger sails would be needed, but there’s plenty of room in space, so if the technology is proven then it could take machines from Earth deep into the Milky Way.

COVID vaccine rollout: Which country in Europe is leading the race?