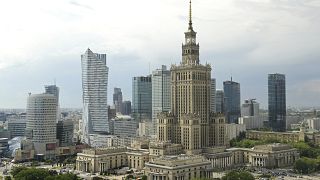 Warsaw tourism industry has now surpassed 2019 levels. Here you can see the communist-era Palace of Culture and Science in the foreground   -   Copyright  Alik Keplicz/Copyright 2018 The AP. All rights reserved.
By Euronews  •  Updated: 30/11/2022

Prior to the pandemic, the worldwide travel and tourism industry accounted for just over 10% of global GDP. After a difficult 2020 and 2021, with, some false starts in the industry due to new variants of COVID-19, tourism is almost at a similar level now.

Speaking to Euronews at The World Travel & Tourism Council (WTTC) in Riyadh, Julia Simpson, President and CEO of the body, painted an upbeat picture.

"Travel and tourism globally used to generate about $9.6 trillion (€9.3 trillion) globally, and at this end of this year we’ll be back to about $8.4 - $8.5 trillion (€8.1-€8.2 trillion). And you might say, well, there's still a big trillion-dollar deficit there, but actually a lot of that is China. And China has yet to reopen.”

As previously, it is cities that are driving this. According to a report released by the WTTC, 82 international city destinations that were analysed accounted for almost half of all international visits, both as standalone destinations and as gateways to other tourism hotspots within countries.

Even amidst 3 difficult years, some cities have now surpassed their previous tourist revenue. In Europe, for example, Warsaw is expected to witness a significant 14% increase in Travel & Tourism’s contribution to the city’s GDP, compared with 2019 levels.

Meanwhile, in the US, Orlando is projected to see a 10% over that same period.

This robust strength can be seen through another medium – hotel bookings. The CEO of hospitality firm Accor, Sebastien Bazin, noted that it is not just Europe leading the way in the rebound in the sector.

“So, business is very strong. Faster recovery than I expected and looking fairly good actually for the first semester of 2023. So, with the notable exception of China and Southeast Asia, Europe is very strong. Middle East is on fire. South America is better than ever projected myself.”

As the pandemic's effects further reduce and people’s concerns about mixing in public and in small places reduce, tourism may continue to benefit.