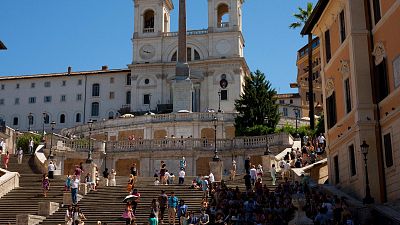 Every major city has its landmarks, the must-see places that you expect to be packed full of tourists no matter the time or weather.

Paris has the Eiffel Tower and Montmartre, Barcelona the Parc Güell and Sagrada Família and Rome has the Colosseum, the Trevi fountain - and the Spanish Steps.

While you would expect thousands of footsteps to slowly wear away at Rome’s Spanish Steps, you wouldn’t expect to see a vehicle ploughing through this iconic location.

But in mid May, a tourist in a hire car reportedly got confused following his satnav and ended up driving down the steps.

According to Rome's heritage protection body, the Maserati broke two steps on the right hand flight rising up from Spanish Square.

Less than a month later tourists in Rome are at it again.

Two visitors from the US have been caught on CCTV, as one of them threw an e-scooter down the steps.

The women hurled the scooter down the 18th century marble landmark, causing an estimated €25,000 worth of damage.

The pair, who were filmed by a passerby, were later caught by the police and fined €400 each.

What are the Spanish Steps?

The Spanish Steps, known as the Scalinata di Trinità dei Monti in Italian, are an iconic tourist destination in Rome.

Located in the north west of the city centre, they link the Trinità dei Monti church with the Piazza di Spagna.

They have made countless appearances in film and TV like Audrey Hepburn’s Roman Holiday and the 1999 version of The Talented Mr. Ripley. They are also known as the site where English poet John Keats died in 1821.

The steps, which were built in the 18th century, received a €1.5 million restoration in 2015 funded by luxury brand Bulgari.

Let’s hope this pattern doesn’t continue and no more damage is done to this much-loved destination.

Watch the video above to see the careless driver in action.