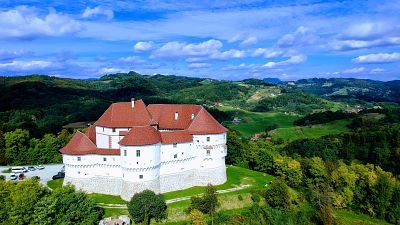 Travelling through Northern Croatia’s lush countryside means stumbling across historic forts, medieval castles and beautiful rolling hills - landscapes that are steeped in history and look as though they have been lifted off the pages of a fairytale book.

The Zagorje and Međimurje regions offer culture-seekers a chance to understand Croatia’s cultural heritage in endless ways. There are romantic myths and gory legends to uncover as you explore museum exhibits, old chapels and historic vineyards. And of course, there’s the chance to tuck into the traditional cuisine, dishes that have been perfected over generations and are served in a typically warm and fuss-free Croatian style.

Zagorje means "backland" or "behind the hills," because it’s separated from the capital of Zagreb by the imposing Medvednica Mountain. The pretty, hilly region is dotted with interesting cultural sites, including Veliki Tabor, one of Croatia’s most iconic and best-loved castles. Sitting on a hilltop 60km northwest of Zagreb, it’s surrounded by romantic cornfields, and forests so the drive there is a particularly scenic one.

The oldest part of Veliki Tabor was built in the mid-1500s and it was expanded over the following centuries, now standing as a pentagon surrounded by four semi-circular towers, and dominating the surrounding landscape. The castle has a tragic legend – a young woman, Veronika Desinić, is said to have drawn the wrath of a Count when she eloped with his son, and he had her drowned in the castle’s courtyard. Years later, a skull believed to have belonged to her was discovered on the grounds while the castle was undergoing restoration, and is now kept in the chapel.

Perhaps a more peaceful, and certainly equally picturesque destination, is Trakošćan Castle. Here you’ll find 215 acres of landscaped grounds, complete with a tranquil boating lake. Previously occupied by generations of the aristocratic Draškovićs, the castle is now open to the public, so you can wander through rooms filled with original furniture belonging to the family, plus portraits, artworks and some weaponry. Julijana Erdödy Drašković, who was the first academically educated female painter in Croatia, had a studio here, which has been kept in its original state, containing her easel and piano.

For many, no cultural itinerary of Zagorje is complete without a visit to the Church of Virgin Mary of Jerusalem. This baroque church, dating back to the 1760s, remains a popular pilgrimage site for devout Croatians as well as a top tourist destination, housing a number of frescos, statues and other religious artworks.

To finish the Zagorje leg of your journey, you can travel much further back in time with a visit to the Krapina Neanderthal Museum. This fascinating museum tells the story of the discovery of Neanderthal bones right here in 1899, through a series of well-designed exhibits. Fossilized remains of as many as 24 early Neanderthals were found, including skulls and teeth, some of which are on display at the museum. There’s a walking route outside the museum which takes you up the hill to the spot where the remains were found

Over in neighbouring region Medimurje, the cultural trail can continue with a trip to Čakovec Castle (also known as Zrinski Castle), the biggest medieval fortification in the county, which sits right in the heart of Zrinski Park. It contains the highly regarded Međimurje County Museum, which has five separate exhibition sections covering archeology, ethnology, cultural history, history and an art gallery. During the summer months, the castle’s atrium is also used as an outdoor theatre.

Wine enthusiasts will want to continue their journey through the region with a tour of Međimurje’s infamous wine road. It winds through 30km of fertile terrain, and passes historic vineyards, ancient cellars with old-fashioned wine presses and the opportunity for some serious tasting.

Familiar varieties such as Sauvignon Blanc, Chardonnay, Pinot Noir and Cabernet Sauvignon are produced here, but Međimurje is particularly famous for Pušipel, a refreshing white wine with a light straw colour. There are fifty-odd wine-tasting stops on this route so wine travellers are spoilt for choice. Boutique winery Lovrec, run by a family of winemakers, specialises in organic production and offers small-batch tastings in a sunny, scenic setting. Hazic is a more modern affair, a wine "camp" where you can stay overnight, or just enjoy a sampling session in the wine house, paired with homemade apple chips and a plate of meso z tiblice (meat from a wooden barrel), domače slanine (bacon spread) and domaći kruh z črnim oljem (bread with black oil).

With exploring done and your appetite whetted, it’s time to sit back and savour the flavours and hospitality of the region. Croatian cuisine contains many variations, and Zagorje and Međimurje are famous for hearty meat dishes, soups, freshwater fish and local cheeses, which can all be sampled on a typical menu at a traditional restaurant. Round the meal off with Krapci, simple peasant cakes filled with cheese, walnuts, and apples that originated in Medimurje and are loved throughout the country.

Croatia drops all entry rules: Here are the 9 best places to visit