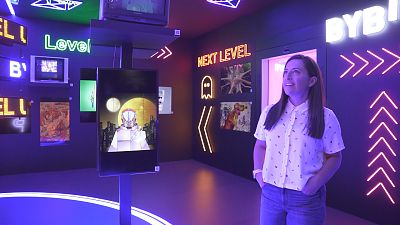 Welsh artist Julian Castaldi and his wife Ellie came to Dubai to cat-sit for a friend nine years ago. They loved the emirate so much, they never left.

One of seven emirates in the United Arab Emirates (UAE), Dubai is attracting creative talent to the region with incentives such as Golden Visas approving resident stays for 10 years rather than the standard three years.

“I think the big difference from working in the UK, or working in LA, which I did, is the diversity,” says Julian. “I've created work in Arabic and in Hindi, which wouldn't have happened elsewhere. The art scene in Dubai is awesome, so nine years later, I’m still here.”

Amrita Sethi was a banker in Dubai until she decided to become an artist, inspired by the emirate’s thriving art scene. Recently she was awarded a Golden Visa in recognition of her contribution to Dubai’s digital art movement.

“I always used to love coming to Art Dubai when I was a banker dreaming of my artistic self,” she recalls. “For me, Art Dubai is a really special place.”

Art Dubai is a highlight of the emirate’s cultural calendar, celebrating its 15th edition in 2022. Hosted at Madinat Jumeirah, this year’s fair was the largest to date with more than 100 exhibitors from 44 countries, and a new section dedicated to digital art. Visitors were invited to buy artworks and NFTs (non-fungible tokens) and explore galleries in the metaverse in addition to browsing more traditional wall-mounted displays.

“This is the first time that you can buy art using cryptocurrency at Art Dubai,” says Global Art Forum Commissioner Shumon Basar. “I think that's really interesting. It opens it up to a new audience, a new collector base, new generations even - so I'm very excited about that.

When there are revolutions in technology, there's always a revolution in culture.

Art Dubai also has a section called Bawwaba, which means gateway in Arabic, dedicated to work from the under-represented Global South.

“Dubai's strategic positioning means that it is the ideal platform for people to come and discover art from the Global South, and by that we mean geographies that are non-Western. So broadly speaking, the Middle East, Africa, South Asia, Southeast Asia, India and Pakistan,” explains Art Dubai Executive Director Benedetta Ghione.

Dubai’s Alserkal Avenue was formed from warehouses converted into galleries. Established in 2008 in the industrial heart of Al Quoz, by Abdelmonem Alserkal, it continues to break new ground.

This year, flagship gallery Concrete presents the first-ever ‘ambisonic’ sound installation to be shown in Dubai. ‘A Slightly Curving Place’ invites visitors to “listen to the artworks”, pushing the boundaries of a traditional exhibition while embracing technology.

On the same street, Volte is presenting ‘The Guernica Project’ by Raghava KK. This constantly growing series comprises large-scale paintings, digital prints and NFTs that retell Indian history through cartoon characters and memes.

Using neighbouring Alserkal Avenue as a model, Al Khayat Avenue is currently converting more warehouses into art spaces. Vinyl-lined Efie Gallery is among the first to open with an exhibition by African artist El Anatsui, famous for his large-scale bottle-top installations, which have been displayed in New York’s MOMA and the British Museum.

Fly me to the moon: Dubai’s next art mission

Further proof that Dubai’s art scene is reaching new frontiers comes from resident British artist Sacha Jafri who recently created the first artwork set to be displayed on the moon.

Jafri’s previous painting sold for $62 million, and now he’s created ‘We Rise Together – with the Light of the Moon’, an art piece that depicts two figures entwined within a heart, etched on an aluminum plate designed to withstand the moon’s extreme temperatures. The artwork was unveiled to the public at a press conference at Expo 2020 Dubai’s USA Pavilion.

Commenting on the piece, Jafri said that his work focuses on a “new hope for humanity”.

Festival of literature: "Dickens would have really adored this."