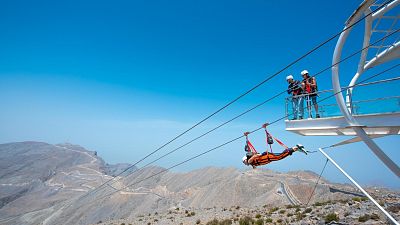 The bridge of my Roman nose knocks against the inside of my safety goggles as my body jolts on the wire I’m hanging from. The braking mechanism prevents a too-quick descent to the landing platform, which is dramatically suspended in mid-air above the jagged Hajar mountain range. My nose hurts, but it was worth it. I’ve just completed Jais Flight, the world’s longest zipline.

Fly like a falcon: Ziplining in Ras Al Khaimah

The descent begins 1,680 metres above sea level, near the peak of Jebel Jais, the highest mountain in the United Arab Emirates (UAE). ‘Jebel’ means mountain in Arabic. The wire spans 2.83km, or the equivalent of flying the length of 28 football pitches. Hurtling down head-first, reaching top speeds of 160km per hour, the clawing fear of falling reminds me how highly I value life.

My zipline flight lasts about two minutes but it seems much longer. Definitely enough time for me to almost relax into my harness and imagine how it might feel to be a bird of prey, like the locally revered falcon, picking out tiny details on the ground far, far below. I spot cars, miniature in perspective, snaking down the asphalt ribbons of mountain road, hairpin transmission towers and cotton wool ball clouds.

Once safely on the suspended landing deck, my body-length harness is removed by the team of nimble operators, who quickly truss me into another – in a seated position this time for the final leg of the journey. Despite the long drop below, my fear is spent and I actually enjoy the ride, ebullient with relief and adrenaline.

The zipline is one of the most popular attractions in Ras Al Khaimah, one of seven emirates in the UAE. Not as well-known as headline-grabbing Dubai, Ras Al Khaimah, or RAK as it’s known locally, is a rising adventure tourism destination.

Food in Ras Al Khaimah: from elevated dining to grubs

Lunch on the terrace of the UAE’s highest restaurant, 1484 By Puro at the Jebel Jais Welcome Centre, is an absolute delight.

The name refers to its height in metres above sea level and its position perfectly captures the otherworldly panorama of Jebel Jais’ magnificent landscape. A cup of aromatic mountain herb tea made with locally grown artemisia soothes my nerves and a well-piled plate of polenta chips topped with artichoke hearts in a vibrant French sauce vierge recharges my energy.

Later that day I’m reminded how delicious lunch was when I find myself eating fried worms at RAK’s Bear Grylls Explorers Camp, all part of the survival training that willing guests sign up for.

My travel companions and I hike from here deeper into the Hajar mountain range where we pose on eerie fossil-crusted limestone and sandstone plateaus for group photos that remind me of U2 album covers.

We could stay at the Bear Grylls Explorers Camp - its converted shipping container rooms have bunk beds, air conditioning and pristine en-suite bathrooms - but we book into one of RAK’s ultra-luxurious five-star hotels instead. There aren’t any worms on the menu at the Waldorf Astoria Ras Al Khaimah. Here, we’re greeted by an oasis of azure pools carved into a sandy shoreline hugging the Arabian Sea and a choice of six restaurants and lounges, some with coastal views, others with elegant cuts of sashimi.

Best ascended in the early morning before it gets too hot, the 239 steps of Dhayah Fort build an appetite. From the crown of this 19th-century stronghold, it’s clear to see why the site was a natural defence post long before the existing mud and stone fortress.. From here, I see vivid green blankets of palm plantations, the residential villas of Al Rams suburb and my next stop, a floating museum on the Arabian Gulf, Suwaidi Pearl Farm.

Housed beyond Al Rams’ mangroves in a wooden barge anchored beneath the glass-still surface of the inlet, Suwaidi Pearl Farm presents the history of the UAE’s pearl divers. Up until the 1930s when cultured pearls became widely available, these hardy souls risked their lives and eyesight to plumb salty depths searching for natural pearls, the region’s primary export before the discovery of oil.

What is pearl diving?

While still on the surface, a pearl diver would plug their nose with a rudimentary turtle-shell peg. They then tied a stone to their ankle to quicken their descent to the seabed. There, they foraged for shellfish - often finding pearls hidden inside oyster and mussel shells.

A tug on a rope attached to the diver’s basket, held by his shipmate (often a relative), signalled a request to be pulled back up to the boat. Sadly, not all divers made it. Of those who did, with swimming goggles yet to be invented, many suffered from impaired vision in later life.

After learning about this perilous trade, we’re invited to fish in a tank for our own oysters and cultured pearls before enjoying a traditional Emirati lunch. Over a feast of mangrove views and fish ‘machboos’, a rice dish made with mixed ‘baharat’ spices, I contemplate the plight of the region’s fishing forefathers, stuck out at sea throughout scorching summers and then living humble winters ashore.

Over a feast of mangrove views and fish ‘machboos’, a rice dish made with mixed ‘baharat’ spices, I contemplate the plight of the region’s fishing forefathers

The last fishing village left standing in the UAE is Al Jazirah Al Hamra, abandoned in the mid-1900s as modernisation took hold. Today, this atmospheric ghost town has found another purpose.

Ras Al Khaimah Fine Arts Festival (RAKFAF) occupies the site for almost two months each year, over February and March, filling crumbling coral-stone homes and dusty courtyards with curated art collections. This year, there are more than 100 pieces on display, from the striking rainbow-coloured block sculptures of Spencer Hogg to the poignant photography of Yousef Al Zaabi. One of Al Zaabi’s images captures Emiratis dressed in traditional long white thobes and sandals frolicking in rare snowfall on Jebel Jais, a reminder of just how surprising this diverse emirate can be.